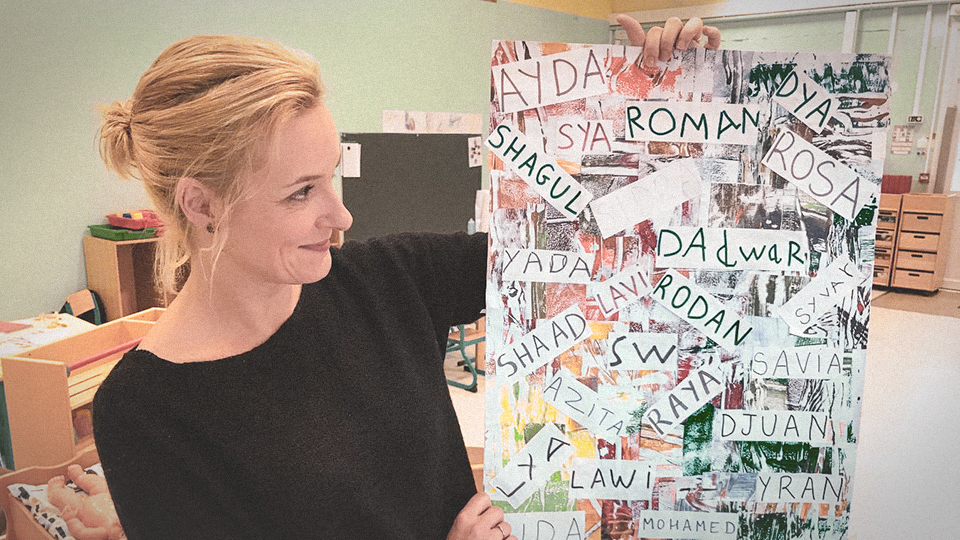 “It all started almost by chance. I was there, there were all those people in trouble, I wanted to help. I introduced myself to the Municipality, I had volunteered, but it seemed that it wasn’t possible. My superior, when he heard that I was going to make myself useful, called me. Later the camp was placed under state control, so as for all children living in France, education became compulsory, free and secular. My headmaster chose my school in Grande-Synthe to welcome the camp’s children and so they started coming to class”.

And so it is that Adeline Markwitz, a teacher from Grande-Synthe, near Dunkirk, Northern France, begins to meet the whole world every morning at her school. She wanted to go and help in the field on the outskirts of the city, called La Linière, and in the end she was able to make herself useful in her daily life. A teacher for 21 years, for seven headmaster. A camp often cited as an example for welcoming migrants on their way, run by the municipal administration and specialised associations. And Adeline, like every teacher, has no favourite students. 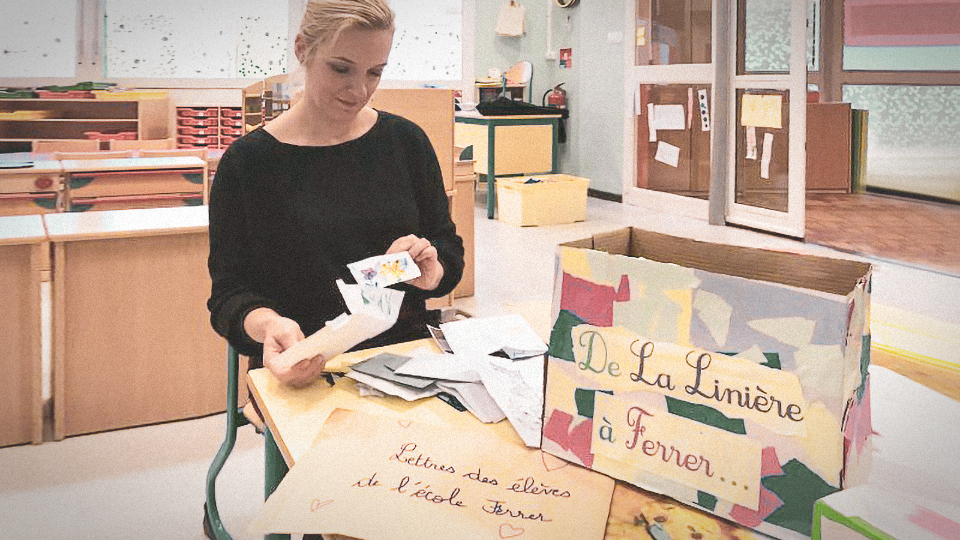 “There are many children that I remember, many stories that struck us: young children who arrived happy and didn’t even feel the weight of the language barrier, I remember a child who was picked up from school by social services because his mother had just been taken to a shelter for battered women, or girls who made friends at school with a simple glance, and boys who managed to become friends simply by playing football.
A nine-year-old girl, Ala, was particularly moved when she recited in front of her classmates a little poem she had learned when she did not speak French at all when she arrived. Another little girl, Sara, had to be hospitalized for a heart problem and I went to her family and offered to take them to her. I am still in contact with them, they are fine, they are in Germany. And the posters hanging at the entrance to the school still bear the names of some of the children who came to us. I didn’t ask the children about their personal stories. Sometimes they would tell us about the trip they had made, which immediately aroused everyone’s admiration, I would meet the families to record the children, but I didn’t try to ask them more than I ask all the families. Only in one case was it different, because when the camp burned down, a family had been housed in an Emmaus project house and I made a commitment to take the children to school and home every day”. 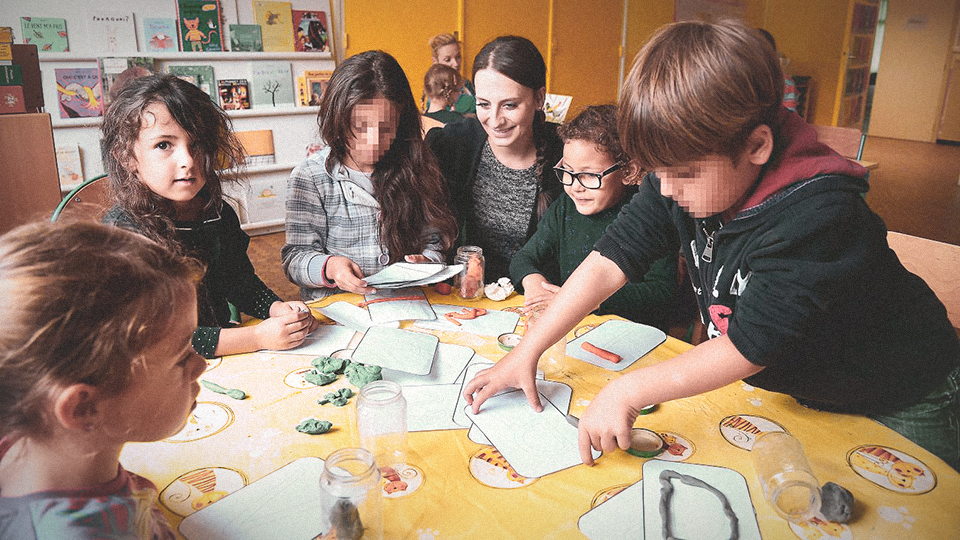 Adeline tells and remembers an experience that was as extraordinary for her as it was for her young pupils. Which was, after all, extraordinary for all of Grande-Synthe. The camp was destroyed by fire in 2017.
“That situation was preferable to the present one. It was much easier to organize the help and accompaniment of the children and we could take care of the health of the people. I am not saying that everything was simple, I was aware of the difficulty and precariousness of that place, but I always felt welcome there”. Although not for everyone it was like that.
“It’s not simple. Many residents do not understand why migrants chose to settle in their city rather than in other nearby cities. They are mistrustful, especially because there are many lonely men walking the streets at all hours, speaking a language that the French do not understand. However, there are no particular problems in the city since their arrival, apart from problems with rubbish.
Some parents of the pupils had expressed concern and even hostility to the reception of migrant children in our school. We communicated a lot with them to explain our approach and this changed a lot the way parents look at migrants, refugees, asylum seekers. How the reactions of our French students have changed. Knowing children “from other countries” they learned a lot about their living conditions and considered them as little heroes. Instead of considering them as threats or victims, they admired them and took their impressions home with them. Some parents then came to help us, welcoming children during the holidays or bringing clothes for them”.

Meeting, knowledge, closeness: could this be the recipe for overcoming the difficulties of integration?
“Human rights are often violated in Europe when it comes to receiving refugees. There should be reflection and collective action on the part of European countries to ensure that each country assumes its responsibilities and guarantees a dignified reception,” says Adeline. “It is not a question of giving asylum to everyone, but of guaranteeing fundamental rights to all those present on European territory and providing them with the necessary information. 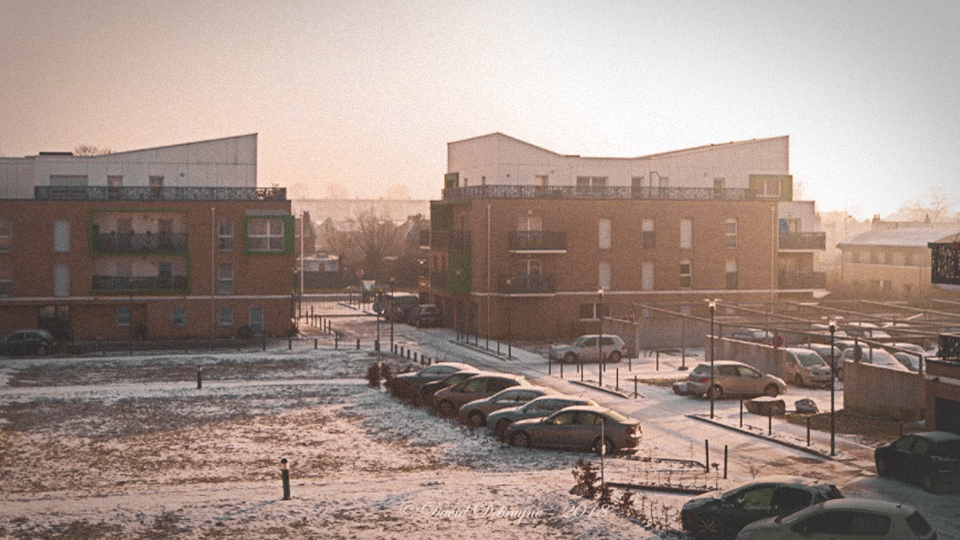 Adeline continues to play her part. “Today, together with another teacher and my boss’ daughter, I founded an association to help these people. What motivated us most at the beginning of this association was to expand our experience with children, but there were already many actions organised by British associations. At the time we thought it was more effective to act for the lonely men because there were few things for them, apart from food and medical aid. We started by organising the distribution of clothing and helping them with administrative procedures. The growing number of migrants and refugees and our experience in the field led us to choose to support them as much as we can, because we all need help when we are in trouble”.