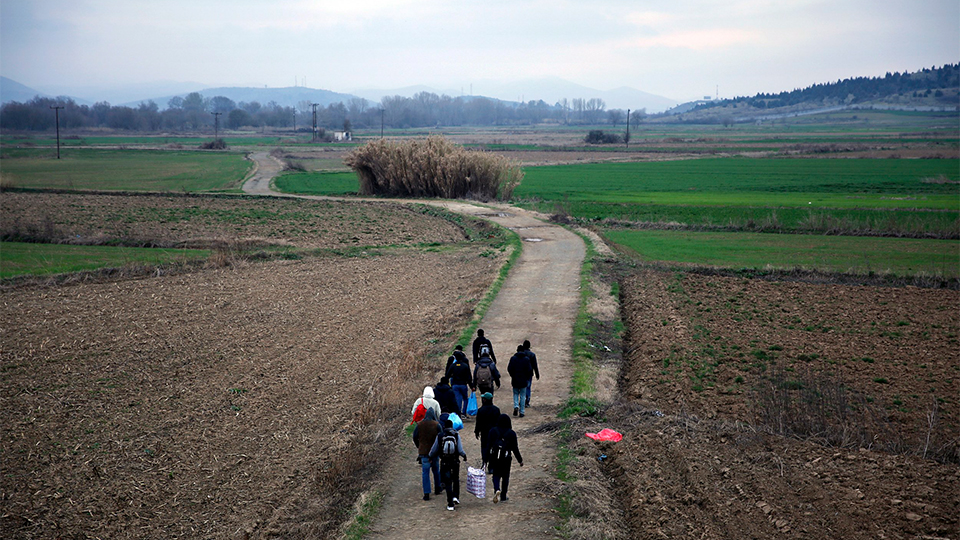 “People travelled from Turkey to Greece to seek safety, yet they were met with violence so serious that at least two were tragically killed. Allegations of violence must be promptly and impartially investigated. Everyone should be treated humanely, shielded from violence and be granted access to protection in the countries where they are seeking safety” said Massimo Moratti, Deputy Director of the Amnesty International Europe Regional Office, presenting to the press the survey EUROPE: CAUGHT IN A POLITICAL GAME: ASYLUM-SEEKERS AND MIGRANTS ON THE GREECE/TURKEY BORDER PAY THE PRICE FOR EUROPE’S FAILURES, carried out by its organisation in relation to what happened at the Greek-Turkish border in recent months.

“At the end of February, early March, Turkish President Erdogan said he would no longer stop people who wanted to leave Turkey by declaring the borders open. A strong and clear signal. The Turkish border guards on the Greek border have ceased control and free buses were transporting those who wanted to leave the border to the Edirne area,’ explains Moratti. “It must be said that this area is also close to the Bulgarian border, but the flow was only directed to Greece. Having worked so hard over the years with the people along the Balkan Route, it was clear what would happen: the words ‘borders are open’ are like a magic formula that sets people in motion, in general, let alone when this message comes directly from the president of Turkey”.

At that point, for a few days, the situation became really untenable. “Obviously the borders were only open on the Turkish side, Greece deployed a considerable force, both police and army. This generated – for a few days – violent clashes between those who tried to pass through and the Greek police, who repelled them using tear gas, making arrests and, in two cases that we have been able to document, used bullets that caused at least three victims,” explains the director of Amnesty International. Some people managed to enter Greece, but were stopped and held in detention at unofficial sites and then repelled.
“It went on for a few days, according to the Turkish authorities about 150,000 people had moved, a number that certainly seems exaggerated, but it is very difficult to know how many really managed to get to the area of the Evros River, which marks the border between two states. It is certain that several thousand remained in the area, sleeping rough, in an attempt to get through. The situation continued until the first days of March, then some people came back, others practically camped there. On 27 March the last people were evacuated by Turkish agents for health reasons, fearing that the Covid-19 virus might spread. At the same time, at the beginning of March, boats were also leaving from the Turkish coast for the Greek islands such as Lesvos, Samos and the others.

Again, the situation was very worrying for these people: on the Greek side we recorded attempts by patrol boats to sink the inflatables, or cases of people who arrived in Lesvos and other islands but were rejected by the people on the coast, some were forced to stay on boats for hours without being able to disembark. Hundreds have landed, but have not been able to seek asylum, because the Greeks first kept them on the ears and on the boats, then, by a presidential decree, they suspended their right to asylum. And this cannot be done, it is a violation of the Refugee Convention, an illegal move by the Greek Government, as illegal were the rejections at the border in those days, the violence and illegal detentions. Today that presidential decree has not been confirmed by the parliament, after a month, but the offices for asylum applications are closed because of the pandemic”.

The Balkan Route is cyclically speaking again, as happened at the end of February, due to intense crises, but in reality it is a route that has never stopped and that – for years – has been the scene of abuse and violence against people. “A situation that varies over time, but with a constant trend. In 2015 there was an influx of almost a million people. From Turkey, passing through Greece, Macedonia, Serbia, to Slovenia and Austria and Germany. Within a few days, because in fact there was an agreement by the authorities to let those people pass along a sort of humanitarian corridor – explains Moratti – Then came the agreement between the EU and Turkey, where the latter undertook to take charge of these people. This agreement was already criticized by Amnesty at the time, because there were no guarantees for these people in Turkey, but according to the EU that agreement was a model to follow. Only that the route has never been closed, even if it is different in numbers, which swell cyclically. The Greek islands by sea and the Evros on foot continue to be places of arrival; in the five Greek islands with their camps we see a shame of Europe. In the camps, at the moment, there are six times more than their maximum capacity, about 37 thousand people, there are accidents and protests all the time, caused by the conditions in the camps: last weekend, there were two fires in the Samos camp, another one the week before. People are piling up in the camps, who are left languishing, without any plans or integration, waiting for procedures that take time to respond. In the meantime, tension is growing with the local population, their xenophobic feelings, while the conditions in the camps on the various islands remain inhumane”.

To this already complex picture, in recent months, the pandemic has also been added.
“An additional problem. In the beginning, and even now, there have been very few cases on the islands, and this has shown how refugees are often the ones who need to be protected, certainly not the ones who bring health problems, despite the stigmatisation they suffer on the subject. There are – in that situation – enormous problems for social distancing, but also positive aspects: it seems that the Greek government intends to transfer at least 2300 people from the camps to the islands on the mainland.

In other areas of the Balkan Route, however, the Covid-19 has become a justification for drastic restrictions on the freedoms of people in transit. “In Serbia and Bosnia and Herzegovina the authorities have taken drastic measures, forcing people into camps. In Bosnia and Herzegovina, in Lipa, a centre with tents has been completed to accommodate those who are on the move, but these are solutions that last 10-15 days before they deteriorate, they are not long-term solutions. On the other hand, the political leaders of the Serbian Republic of Bosnia and Herzegovina and the Bosnia Security Minister himself have declared in recent days that they consider the migrants a problem of internal security, announcing that they want to repatriate them. This they cannot do because there are no guarantees for repatriation, no agreements with the countries of origin and most probably no means of doing so either. In Serbia, which had also behaved moderately in the past, the situation has been militarised, NGOs have remained outside the camps and in recent days shots have also been fired into the air to keep people at bay. It must be said that the Serbian government has taken harsh measures with all the citizens, but the reaction is very harsh.”

And to finish Croatia. Already the subject of another hard report by Amnesty International, Pushed to the edge: Violence and abuse against refugees and migrants along Balkan Route, made public in March last year, physical violence and violations of the rights of asylum seekers were recorded, as well as in Hungary. What is new in this respect?
“Nothing concrete yet, unfortunately,” explains the Amnesty director. “Croatia in particular, like Italy in the Mediterranean, is afraid of registrations of people entering, because this would force it to take them back once they are rejected at subsequent borders. So they let them go, they don’t register them and don’t offer asylum, but they reject them illegally. In doing so, she uses violence. Now the evidence is different and concrete, the attempt to deny this violence is not credible. The European Parliament is talking about it, a new asylum pact is being worked on, which should see the light of day in the coming months. However, we need a structural solution on the right of asylum, a development in the sense of solidarity, otherwise, if we continue to outsource the issue of refugees and migrants to third countries, we will always have situations like Libya, Turkey or the Balkans.