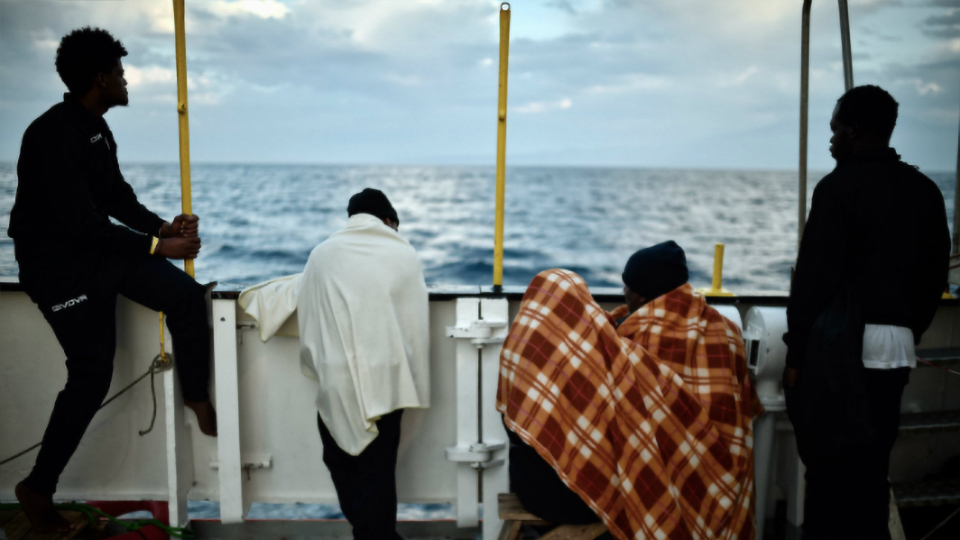 “We could summarize the situation as follows: in the face of a known and repeated condition of violation of the rights of migrants, asylum seekers and refugees in the Central Mediterranean, the Covid-19 pandemic represented, for some States, an opportunity to be used to make the lives of these people even more difficult”.

Sara Prestianni, Migration & Asylum Program Officer of EuroMed Rights, comments on the situation in recent months. “EuroMed Rights is an NGO that was founded in 1997, following the BARCELONA DECLARATION process, as a civil society network committed to introducing human rights and democracy issues into the Euro-Mediterranean dialogue. Today the network counts more than 80 organizations, from both sides of the Mediterranean, that carry out a joint work of dialogue, development of relations and shared actions on four main themes: human rights, gender and women’s issues, economic and social rights, asylum and migration. We are also working on shrinking space of civil society, such as the criminalisation of solidarity. We have offices in Brussels, Denmark, Morocco and Tunis”.

Precisely in the hottest days of the pandemic, EuroMed Rights has created several initiatives to meet and discuss the impact that Covid-19 has had on civil society and rights.
“Let’s start by saying that some countries have managed, better than others, to safeguard the economic and social rights of their citizens. Others, on the other hand, have used the situation to contract these rights. With regard to the issue of migration and the right of asylum – explains Prestianni – there has been a substantial departure from the issue of media and politics, at least compared to what we are used to, but on the ground the situation has worsened. Compared to what we see, between formal and informal camps, the impact has been evident, affecting the most vulnerable groups. In other situations, the Covid-19 has been used to reduce the space of access to inalienable rights. In the central Mediterranean in particular, we have witnessed the closure of ports, the repatriation of institutional responsibility and floating hotspots for people who could do quarantine once they were accepted. Unable to see us physically, as a network we have intensified our contacts with members on the ground, also due to particular focus, such as the situation of domestic workers in Jordan, for example, or push back from Cyprus to Turkey. Calls from civil society have been repeated in recent months, with force; appeals for policies to contain the virus to take migrants, asylum seekers and refugees into account”.

On the one hand, the pandemic overshadowed those less visible to the media, while on the other hand it allowed human rights violations to escalate away from public attention.

“With respect to the situation in the central Mediterranean and human rights violations there is an origin: the situation in Libya. In the country, as everywhere else, there is also a health crisis, which adds to a conflict that has escalated in recent times. For years we have been denouncing the situation of migrants and refugees in the country, they have continued to embark, as was normal, given the hell from which they are fleeing. On the one hand, ports were closed, as in Italy and Malta, but people arrived on their own. As has been said, the response was that of the floating, discriminatory and useless hotspots, and that of the refouleurs, which in the case of Malta – as documented by journalistic investigations – made use of a fleet of private individuals. This aggravates the violations that have occurred during these years of training and collaboration with the Libyan Coast Guard, pushing people back to a country where human rights are violated,’ explains Prestianni.

Elsewhere, the Covid-19 was an opportunity to repress civil society protests.
Algeria, which has been crossed by a massive civil movement for change for over a year, but also Morocco and Egypt.

EuroMed Rights has drawn attention to these three theatres in three documents. According to the NGO, in Egypt, where the state of emergency in 2017, regularly renewed every three months since then, has been modified to cope with the COVID-19 pandemic. Some changes violate international law. “Only five of the 18 amendments concern health emergencies, which shows that the emphasis is placed more on rooting out repression than on combating the virus.
The amendments give the President al-Sisi more powers to deal with the health crisis, the document says – However, they also help stifle dissent by suspending universities and schools, while strengthening the President’s personal authority in the country. The latter can ban assemblies without reference to public health reasons and entrust the investigation of crimes to the military prosecutor’s office, which is particularly worrying.
At the same time, the story of the fight against ‘false news’ about the Coronavirus has been used to justify the regime’s efforts to restrict freedom of expression. In addition to the approximately 500 websites blocked in Egypt since 2017, several news sites and many social media accounts have been blocked by the Supreme Media Regulatory Council in the last two months for allegedly spreading ‘rumors’ about the virus”.

Compared to Algeria, EuroMed Rights has denounced: “While the whole world focuses on the fight against the spread of COVID 19, Algeria is witnessing an unprecedented persecution of activists and journalists involved with the Hirak (the protest movement). Since the beginning of March, the Algerian government has been condemning one after another activists and journalists with procedures that completely ignore the rights guaranteed by the Algerian judicial system, including the Constitution and the Code of Criminal Procedure, and oppose Algeria’s obligations under international treaties and conventions”.

Finally, Morocco, where EuroMed Rights has recorded: as “On 20 March, Morocco adopted the “state of health emergency” to combat the COVID-19 pandemic. This state of emergency made it possible, among other things, to support the implementation of containment, the closure of schools and universities and the shutdown of transport systems. One of the decisions taken seems almost to have nothing to do with the pandemic currently threatening the kingdom. Law 22-20 aims, in fact, to further control the use of social networks and transmission networks. This bill, of which several clauses have been leaked on the Internet, raises questions about both substance and form”.