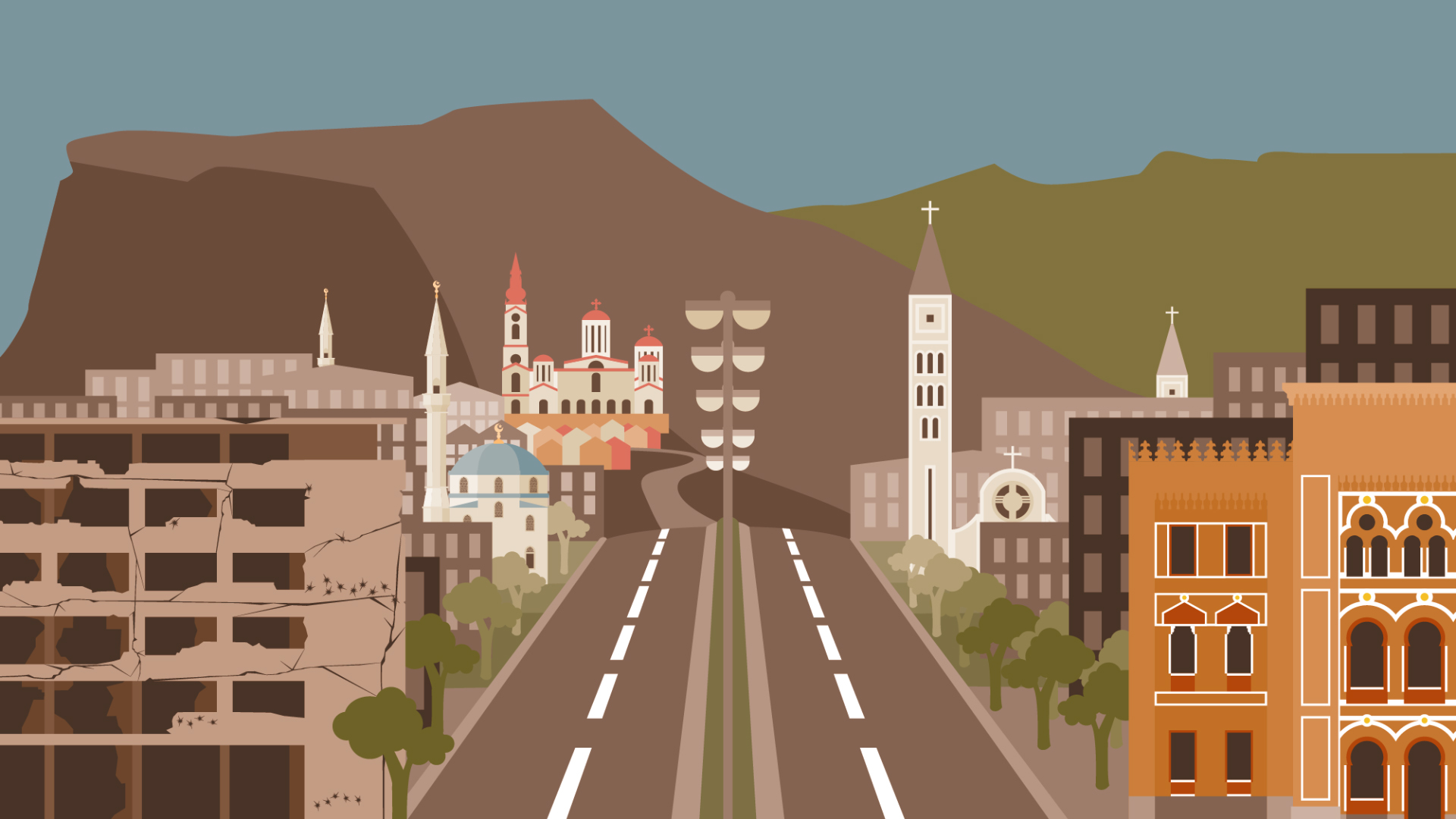 “There are natural boundaries, like rivers, seas, mountains. Then there are the man-made ones: fortresses, walls, checkpoint Charlie in Berlin and the like. I saw the 99 walls in Belfast, I saw the remains of the Berlin Wall. There are no walls in Mostar. There’s the Boulevard, though, which is a border, a street that divides the city. For me borders are barriers, margins, limits, thresholds, but also challenges, with a great desire to cross over to the other side. I don’t conceive borders, for me the world is a country. I imagine the world with a unique passport.”

Dario Terzic claims that “I live in Mostar in exile. It’s an exile I wanted.” Journalist and writer, university researcher in journalism, cultural director of the Centre for Culture of Mostar. His city. Which hasn’t always been a safe haven.

“When I speak of myself, I call myself one of Mostar”, without saying anything else, I was born here. After finishing my studies in journalism in Sarajevo, in 1988, I started working for city newspapers, both radio and magazines. And then came the war. As a journalist, in that situation, I always tried to remain faithful to an idea of legality. After the recognition of the Republic of Bosnia and Herzegovina I chose to work for the media that respected the new country. Thus, despite my Croatian origins, I opposed nationalist politics. With the division of the city in 1993, after many problems, I ended up on the Bosnian side. I always remained, except for a short period in Italy, and started working for Radio X, which was part of the Cultural Centre of Mostar. For years I was the editor of this radio, which should be remembered as the last mixed radio (in the sense of national groups) in the city. Unfortunately, in 2016, also this radio was turned off. Today in the Bosnian part of Bosnia and Herzegovina we do not have any Croatian leaders in the political institutions and vice versa. The division is confirmed for the umpteenth time. As a journalist, researcher and cultural activist I worked a lot on divided cities, my doctoral thesis was on ‘colour’ as a factor of conflict in divided cities”.

Mostar city divided. Mostar and its magnificent bridge victims of the war in the 1990s, Croats and Bosnians (Muslims of Bosnia). But telling Mostar risks being a catalogue of stereotypes for those who don’t really know it. How would you tell Mostar to those who don’t know it or visit it as a tourist, without getting in touch with the daily life of the city?

“Mostar is a beautiful and cursed city,” replies Dario. “A very fascinating city, without a doubt. With a wonderful river, the coldest in the world (the Neretva), with a very famous bridge, but a city difficult to understand, difficult to live. Divided among nations, powers, weaknesses, united in a total confusion. Mostar is still a divided city, with a Bosnian majority on the East bank and a Croatian majority on the West bank, with the few remaining Serbs divided in both areas. A sleeping city, when it comes to citizens, civil action, rebellion. Many are out of work. Those who belong to the nationalist parties manage to live well. Jobs are linked to clinical logic, business relationships based on corruption. It’s not going on and for this reason it’s always the fault of the ‘others’, the war (which has been over for 26 years), communism and so on. With the war, the composition of the city’s population has also changed. People arrived who brought new subcultures that had nothing in common with the spirit of the ancient Mostar. There is a lack of critical mass, necessary to have an open city, a rebellious city like Mostar was years ago. Young people are discouraged, mistrustful. They can’t wait to escape, find a job and a better future in another country. I’m afraid that in the end Mostar will be a city of old men and mobsters.”

So many problems, so many symbols, which on the one hand make Mostar famous all over the world, but which sometimes imply a burden to bear. A cumbersome story. Mostar, however, is not only that. And it can teach a lot, whether we talk about war or, as happens today in Bosnia and Herzegovina, migration.

“When we talk about migrations, the history of Mostar can teach a lot, particularly with regard to overlapping identities, instead of fighting each other. I have no certainties, I don’t know how much history can teach, but the history of Mostar will be able to offer facts, arguments for analysis” – says Dario – “We at Mostar know migration in two directions: many monsters who during the war were expelled, chased away, left their hometown forever. And then there is another migration, the one we see in recent years, with many migrants from the East, in search of a better life, have stopped in Mostar. As far as the migration of monsters is concerned, since 1993, we have different stories, regardless of which countries people have managed to arrive in. It was not the same to be an immigrant in Italy or an immigrant in Sweden. I arrived in Italy in June 1995. I knew the language, it was easier for me to get in, to find a job. In the cooperative I worked for, in Bologna, they told me that as an immigrant I could have 30 thousand lire a day, but the Municipality offered a very different version: according to them I had the right to help only if I was in collective housing. My sister, instead, had gone to Sweden in 1993 and a year later she had her own apartment, with all the expenses paid. Things change depending on the country you are in: whether it is a rich country or not. Bosnia and Herzegovina is a poor country. Many people don’t make it to the end of the month and the migrants who stop here don’t have much to hope for. Most of them say that they only want to continue their journey westwards, France, Germany, and that in Bosnia – therefore also in Mostar – they are found only out of necessity. There are people who understand them, but also many who think that they are not migrants who have escaped from the war, but “false refugees” who come to Europe in search of work. There are many misunderstandings, inappropriate reactions, even from the authorities. There are those who say that migration represents a new wave of Islamisation in the country, that organised crime, terrorism… a bit of everything is behind it. The Coronavirus pandemic has drawn attention to other problems, but we will still have to deal with migration”.

Also because, from 2015 to today, many things have changed and opinions in Bosnia and Herzegovina, as in Mostar, are very different. “It depends on the day, it depends on who is asked” – says Dario – “The part of the Federation inhabited by Croats does not really want the migrants. The same for Republika Srpska, the part of the federation with Serbian majority. So most of them are in the area of the federation with a Bosnian-Muslim majority, as in the eastern part of Mostar, towards Sarajevo, Bihać and other centres. At the beginning of the migration crisis there was some humanitarian movement to help them with food, clothes. But it was the first wave and then the oblivion began. There are some NGO’s who took charge of this matter. I don’t know what the perception of the people of Bihać, which is much closer to the Croatian border and where you can see these refugees mistreated by the Croatian police live. We, in Mostar, are quite far away and our opinion is created mainly through the media, but in the meantime we are powerless with regard to the violence on the border between Bosnia and Herzegovina and Croatia. It is Europe that should react, Croatia is part of the European Union. Bosnia is a very fertile ground for corruption and it is very likely that a lot of money for migrants will end up in the pockets of the local mafias. On the ground, we do what we can. Some projects and initiatives of the LDA in Mostar, a comprehensive analysis of migration crises presented in Brussels, initiatives to help migrants from the Salakovac collective centre (north of Mostar), some interesting projects such as theatre workshops in which individuals, but also entire migrant families were involved. The aim of this initiative was to bring migrants closer to the local community, to create links, knowledge; to make them, at least for a while, come out of what is a closed and limited world as a collective centre”.

Because, as Dario says, even escape in life depends on where you get to.