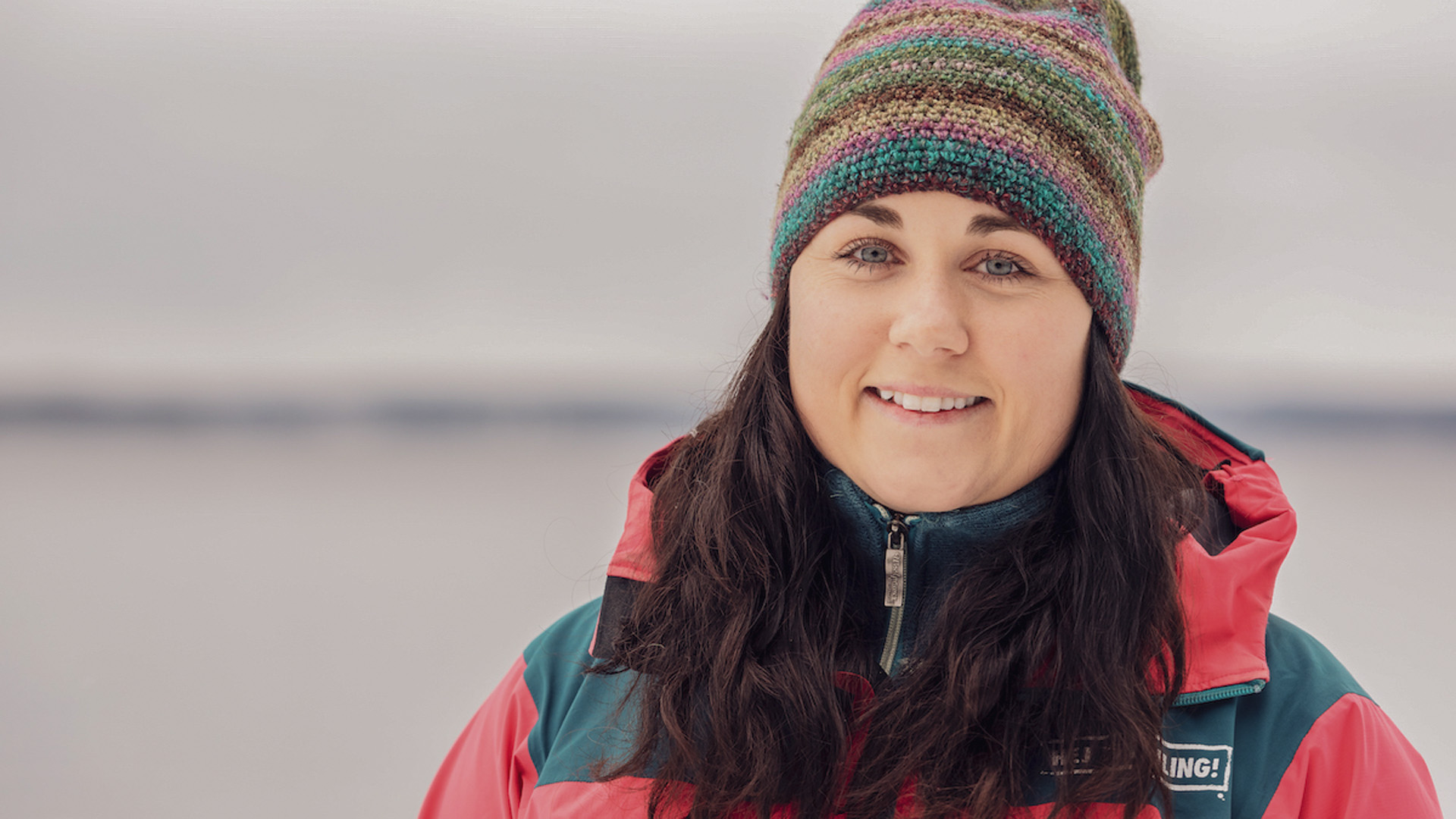 “My name is Emma Arnesson, I am 33 years old, living in the Swedish mountains. I was born and raised in Sweden, but since high school I have dedicated my life to traveling the world to learn about humanitarian issues. I have always been very interested in gaining knowledge about injustice so that I can get involved in trying to find solutions and make the world a better place.”

Emma is the founder of Hej främling (Hello Stranger), a Swedish non-governmental organization that has played a very innovative role in the social world in Sweden.

“Some people might find my approach naive, but I choose to think that every person can have a big impact on the world. My desire to contribute to the well-being of everyone led me to start the association I am privileged to work for today. Challenges and problem solving, both in big and small issues, appeal to me. It’s almost as if they give me purpose in life. I’m not afraid to roll up my sleeves or get my hands dirty. But of course, sometimes I need to rest from hardships and that’s when I go out and explore nature. Outdoor adventures bring peace to the mind and make me feel the wonder that is the best feeling I know! It all started between me, a small group of my friends, and a large group of asylum seekers from around the world. A group that, knowing the qualities of skiing as a moment of sociability and integration, we had the idea of using this sport in the approach to refugees. It wasn’t easy, but the will to improve their lives was decisive. And it worked.” 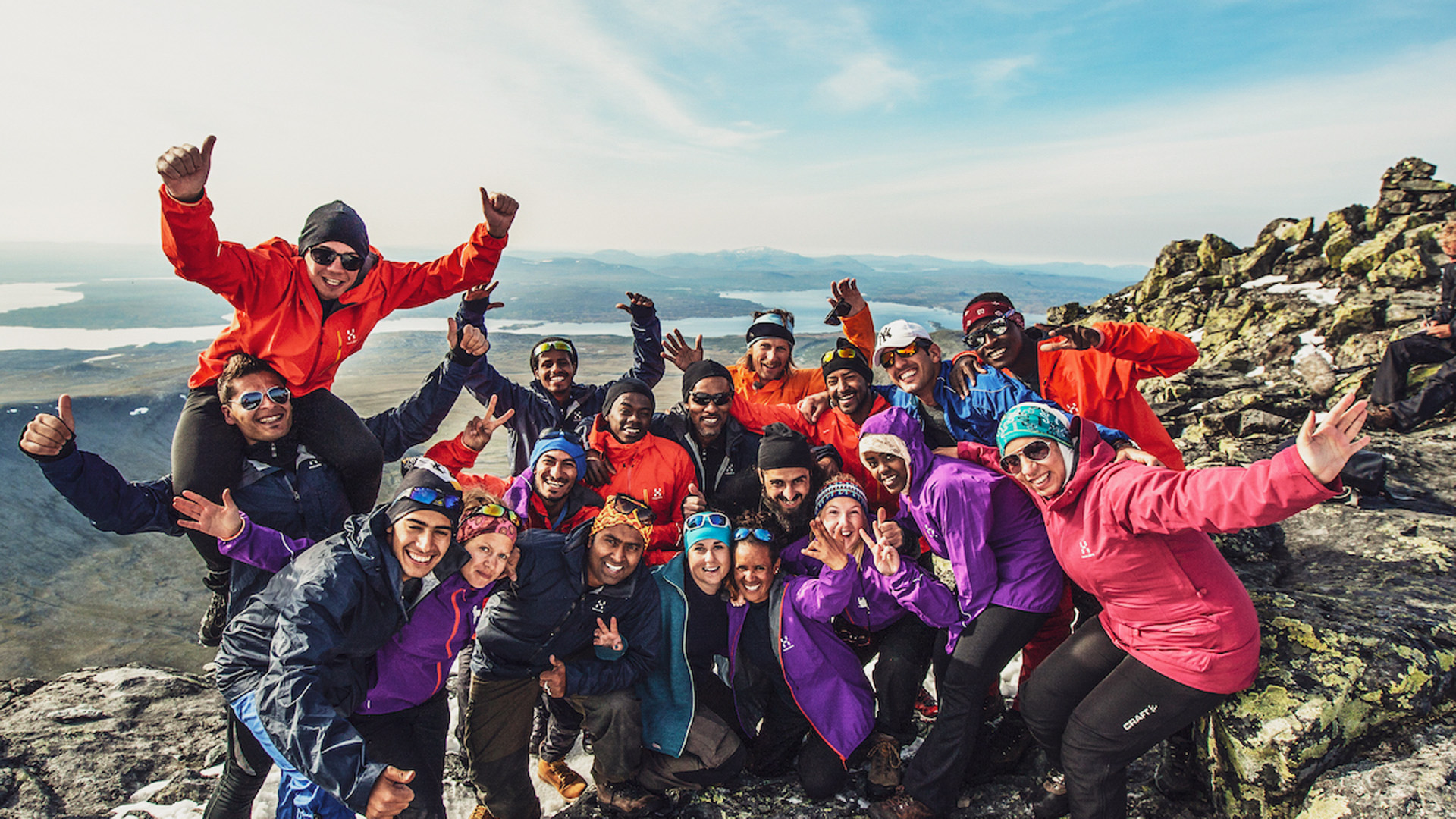 Certainly the approach of Hej främling (Hello Stranger) is very original. “It was all very random. We were the right people in the right place at the right time,” says Emma. “The association offers free health promotion activities that are open to everyone. The organization has developed a health-oriented method of integration in which thousands of refugees and Swedish citizens have taken part over the years. The activities are mainly led by volunteers supported by Hej främling employees when needed and are mainly related to culture, sports and nature. Activities such as choir singing, soccer, running, yoga, hiking and winter games are very popular and common initiatives that can be found all over Sweden. We work in eight counties, from the north to the south of Sweden. Free activities bring people together in a non-dramatic way, which leads to newcomers and residents developing relationships and building valuable networks for everyone. In 2019 alone, we engaged over 18 thousand people in our activities and 54% were newcomers/asylum seekers. We believe that our health promotion initiative is a very important foundation for inclusion and integration into Swedish society.”

Emma came to an uncommon approach to the topic of integration after a long experience in the field. “There is a common thread between the choices I’ve made in life: volunteer assignments in Zambia and Southeast Asia have taught me an incredible amount about vulnerability and how privileged we are in Sweden,” Emma says. “All the insights I have gained from working in other countries have made me humble and at the same time I feel a responsibility to take advantage of my advantages as a Swedish citizen. I have always had a strong drive to try to support people who were not born with the same opportunities as me. In 2013, I returned to Sweden after living in Canada for almost a year. I quickly realized that there had been changes in my hometown of Östersund during my time away. A large military facility in the woods had been turned into a refugee camp for asylum seekers. The local newspapers wrote many articles about problems and conflicts and it seemed that no one was happy with the facility. It was such a strange thing to me. I was quite irritated that the migration system had failed and the camp had become a target for huge amounts of negativity. My belief was that we had all the tools and conditions to be the best hosts in the world for people fleeing war and persecution. So why was there so much negativity? I knew absolutely nothing about the asylum processes, what the mission of the Swedish immigration agency was, or how the camp outside Östersund was run when my friends and I decided to find out what was going on. We figured there would be people in the camp with different support needs and thought maybe we could help. So, we headed to the old military facility hoping to meet someone, but found only 300 asylum seekers, isolated in the woods, far from the nearest community. The camp residents were not used to visitors and asked if we were lost. We were told that staff were only present twice a week and only for two hours. A large group of asylum seekers gathered around me and my friends as we pelted them with questions. Where were they from? How long had they lived in the camp? Did they know how long they would be there? What was it like to live in the camp? What was good and what was bad? What did they desire and what did they need? The conversations we had were incredible! We were amazed at how inviting, friendly, and interested the audience was. We were all strangers to each other, but it was as if we carried our hearts in our hands and came to a silent agreement to all come in peace. We were told the most tragic stories of war and flight, loss and worry and broken dreams, it was not at all what we expected or what we were used to. Asylum seekers expressed several things that made living in the camp difficult. Everything from lack of space and privacy, isolation, not being allowed to cook for themselves, lack of things to do, difficulty socializing and making friends, and insufficient information from the Swedish Immigration Agency.” 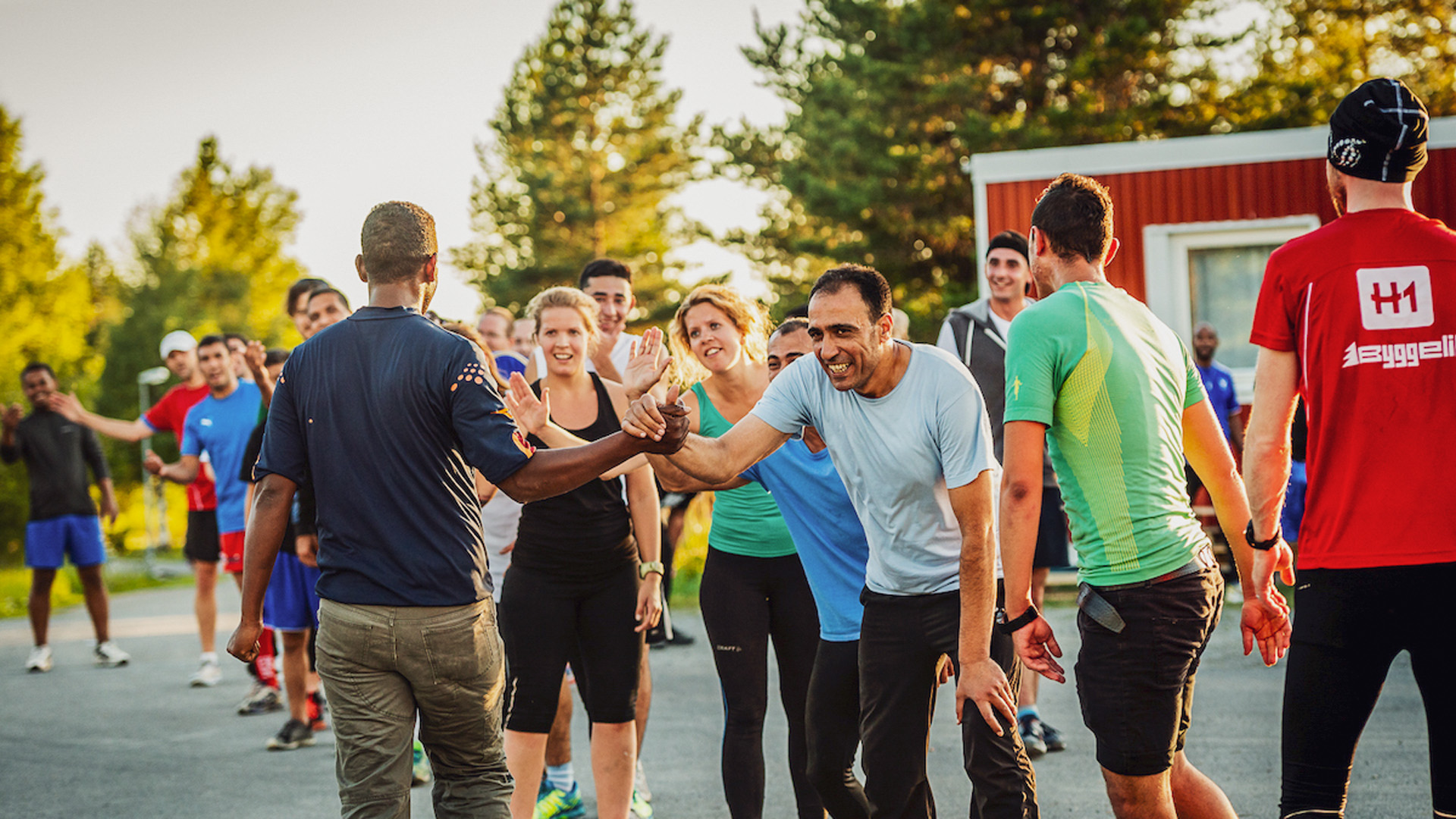 Emma and her friends were amazed. “We asked what was the best thing that had happened so far in the camp and the crowd was silent until one man mentioned an occasion when asylum seekers had the opportunity to try cross-country skiing. Others agreed. I couldn’t believe my ears! So there we all were; a large group of asylum seekers from all over the world, me and my friends, in winter sports paradise in Sweden. The idea came on its own. We thought it would be easy to organize, fun and a good fit for us. I guess you could say it was the starting shot for what quickly developed into the association.”

And Hej främling’s activities are varied: promoting health initiatives, especially outdoors; training new volunteers who want to share their hobbies with others; working in local sports and outdoor culture clubs to create safer, more accessible and open spaces where all are welcome; organizing educational workshops focused on mental, physical and sexual health; share information on different topics that may be useful for newcomers such as the asylum process in Sweden, the Swedish labor market, Swedish culture, and more; introduce asylum seekers and newcomers to the values of Hej främling by doing different types of outreaches such as visiting asylum camps, language classes, and neighborhoods; collecting and distributing equipment needed for the organization’s activities; advocacy and lobbying work; sharing stories and inspirations of integration, inclusion, and health promotion in social media; developing and testing new health-focused integration concepts; offering lessons in diversity, sustainability, and solidarity to other organizations; selling Hej främling-related products in the organization’s web store; and applying for funds and grants in order to achieve the organization’s visionary goals.

“We know that asylum seekers arriving in Sweden live with unusually widespread mental illness,” Emma says, “Many studies, and our experiences working with the target group, confirm this. As it is now, the asylum process in Sweden is not conducive to increasing health among people who are already very vulnerable. All people have certain basic needs: food, water and sleep, but also safety and stability. The needs for belonging, self-esteem, trust, and goals are also very important. As an asylum seeker, you are forced to give up control of your life, leaving your fate in the hands of the authorities of a country you do not know. Sometimes, for a long time, while your claims are being screened by authorities, your personal networks are cut off, your ability to communicate is limited, and a thick blanket of anxiety and stress surrounds you day and night. Even though the camp outside of Östersund was only supposed to house refugees for a short period of time, people ended up living there for years waiting for decisions from the immigration office. I have friends who have had to wait for two or three years with no chance to work, study Swedish, or make plans for their future. We believe that it is a huge waste of human capital and a real idiocy to let people fall into such a state of mind. It is unworthy of a country like Sweden and a problem that could be solved with relatively simple measures. As it is now, great resources are needed to rehabilitate people who have ended up in serious psychological problems during their asylum process. Unfortunately, the responsibilities of the authorities do not meet the humanitarian needs of newcomers, which in itself leads to a spiral of unfavorable effects for individuals and society. That’s why we decided to work with activities that lead to healthier routines, reduced loneliness and increased vitality, giving newcomers more knowledge about physical and mental health.” 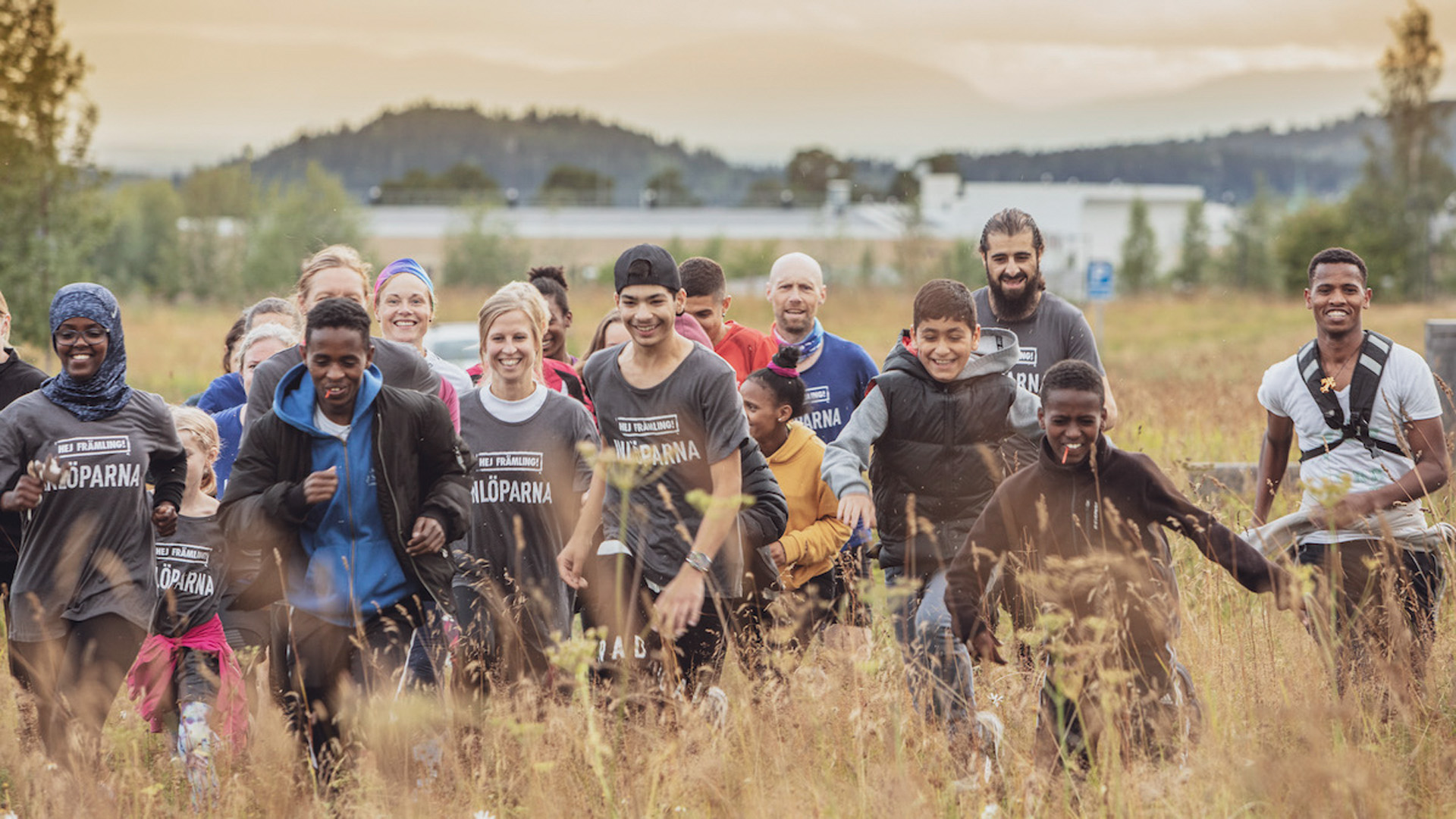 Yet, for years, Sweden has been considered a model of reception. “Polarization on the issue has increased over time. In 2013, when we started our organization, it was clear that few people were aware of why more and more asylum seekers were coming to Sweden,” Emma says, “the war in Syria and the situation in Eritrea, for example, were not something the general public had a grasp of, and the emergence of new asylum facilities became difficult to understand. I got the impression that the Swedish authorities were not good enough at answering the public’s questions and thoughts about what increased asylum immigration in Sweden could mean for locals, it took several years before the government recognized that civil society played an important role in how integration worked in Sweden and by then dissatisfaction and frustration was already ingrained in many. There was a feeling that the authorities had not foreseen the costs, resources, and adjustments needed, and this meant that different vulnerable groups began to be pitted against each other. In 2015, and a few years later, dissatisfaction probably peaked.  Today, I would say that civil society has demonstrated its strength and ability to address social challenges. I think that has led many citizens to feel less anxious and more determined to find solutions that will allow us to continue to show compassion for other human beings and continue to have generous asylum immigration. So even though we’ve struggled a few years, I think the public perception is that we need to show courage and protect people in need. I think we’re learning from our mistakes and improving integration and inclusion, which is a big win for our little country.”