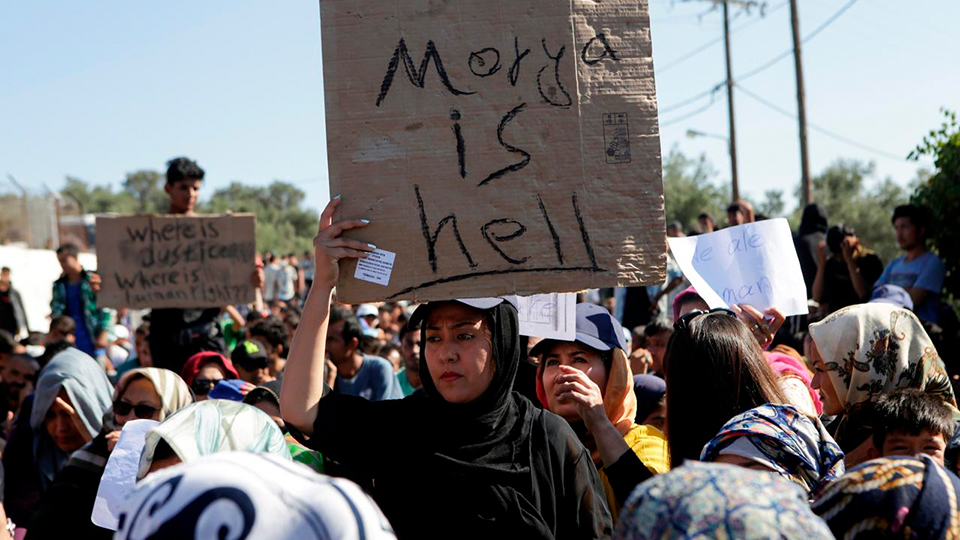 Update on the EU ‘hotspots’ Moria, by the Greek Council for Refugee and Oxfam

“The latest decisions taken by the European Union and Turkey will only further aggravate what is now to all intents and purposes the worst humanitarian catastrophe in Europe”.

This is a report released in recent days by Oxfam and the Greek Council for Refugees (GRC), which has collected alarming data: the number of migrants in the five camps set up by the European Union in the Greek islands is currently six times higher than the actual reception capacity. More than 40,000 asylum seekers are in the refugee camps set up by the EU in the Greek islands. In these conditions, which the report defines as inhumane, there is also growing alarm about the possible spread of Covid-19.

According to Oxfam and GCR, four years after the agreement between the EU and Turkey, the humanitarian impact on the fate of tens of thousands of men, women and children fleeing war and persecution in countries like Syria, Afghanistan or Iraq is devastating.
Oxfam and GRC, in presenting the report, made an urgent appeal to the Greek Government to provide immediate humanitarian aid to the people on the islands and to cancel plans to build new detention camps.

“Nothing can justify the indiscriminate detention of people seeking asylum, or sending them back to countries where they risk their lives or their freedom – said Paolo Pezzati, policy advisor for humanitarian emergencies of Oxfam Italy – At the same time EU member states have a humanitarian duty to intervene by welcoming the many desperate people who are exhausted in Greece.

“This is a humanitarian crisis that affects those fleeing wars and persecution – added Spyros-Vlad Oikonomou of the GRC – A situation that is a direct consequence of the agreement between the EU and Turkey, which has turned people in need of security and dignity into pawns of political games, which overshadow respect for fundamental human rights”.

The most serious situation remains the situation in the camp in Moria, Lesvos, where at the moment there are about 20 thousand people in a facility used to house seven times fewer people. Almost half of them are children, 60% of whom are under 12 years old and 15% have arrived here alone.
A situation that has dramatic psychological consequences for children forced to live, often without health care. in a permanent state of fear, anguish and insecurity, even for very long periods. Exposed to new traumas, after surviving atrocious conflicts and dangerous journeys. On 13 March, the Greek government also announced, due to the spread of the coronavirus COVID-19, the suspension of all asylum procedures until Friday 10 April.

“The recent decision of the Greek government to indiscriminately detain refugees, denying them access to asylum and sending them back to countries at war or in dangerous contexts, is exposing migrants who are already very vulnerable, including women and children, to further risks,” Oikonomou added.

In the GCR report and Oxfam also denounce how the Greek authorities have already begun to detain people arriving on the island of Kos for the duration of the asylum procedures. These are families with very young children, vulnerable asylum seekers who need immediate medical and psychological assistance, and women who have suffered violence.

“The refugees who arrived in Kos do not have access to medical care, nor is it explained to them why they are in detention – added Oikonomou of the GRC – New refugee camps are being set up on all the Greek islands, but it will take time and this situation risks exploding”.

“The current situation and anti-migrant rhetoric in Brussels and European capitals has only fuelled the narrative that migrants are a threat and fomented forms of racism throughout Europe. – concludes Pezzati – In recent weeks refugees have been attacked on Greek islands and aid activities have had to be stopped because the threats have not spared humanitarian workers. It is good news that some EU countries have undertaken to relocate up to 1,500 unaccompanied minors from Greece. However, individual initiatives cannot replace collective action at EU level to put an end to this immense suffering. While the virus emergency, with the first cases also reported in Lesvos, is creating additional risks and uncertainties for the future, it is crucial that governments continue to protect the most vulnerable refugees and deliver on their promise to ensure safe conditions for children.”

That is why GCR and Oxfam are calling on Greece and the European Union to make an immediate change of course on migration policies. For European governments to act together now, sharing responsibility for the people who come to Europe and helping them to rebuild their lives.