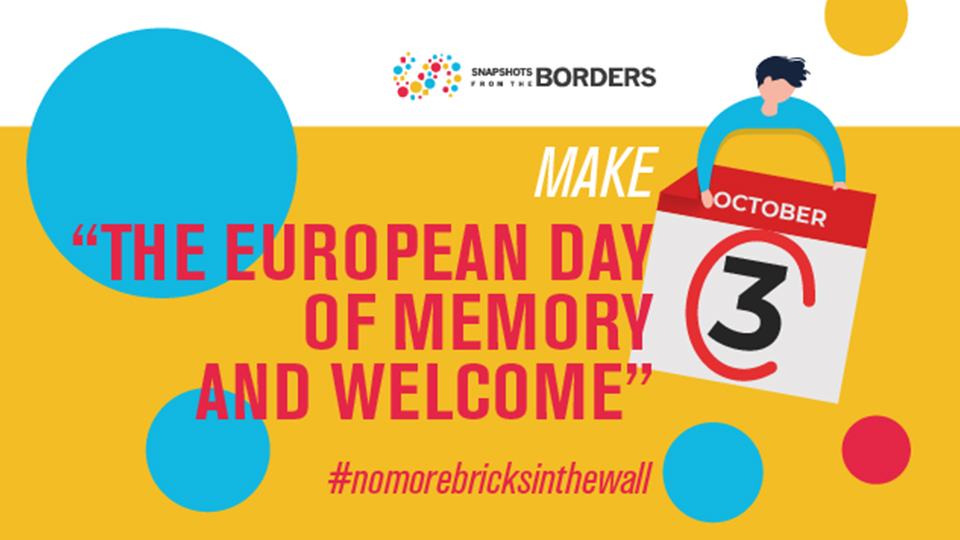 The 3rd October is a symbolic date, reminiscent of the day when, in 2013, 368 people including children, women and men lost their lives in a shipwreck off the coast of Lampedusa.

It seemed that this tragedy could change forever the border policies of the European Union, whose institutions promised to develop a new approach to migration. But that was not the case.
From October 3, 2013 to today, 17,900 migrants and refugees have died or are missing in the Mediterranean Sea. While 2016 was the most lethal year, with 5,096 people who lost their lives in a desperate attempt to find salvation in Europe.

On May 15, 2019, the campaign NO MORE BRICKS IN THE WALL! implemented by Snapshots from the Borders project, that links border towns and Islands facing migration at borders entrance, launched the petition Make the 3rd October the European Day of Memory and Welcome!

“We ask citizens to join the border territories launching this petition in being part of a solidarity movement by signing and bringing the message of humanity and solidarity to the center of the EU institutions.”, asks for the petition that is collecting signatures online. “Share responsibility!
Together with the Border Territories launching this petition we want to spread our voices and call on all national and EU policy makers to fulfill their responsibilities to implement coherent migration policies. The needs and conditions of local communities hosting arriving migrants need support from the European level – a support that stands in solidarity with all human beings — local citizens and migrants. Stay human! People fleeing war and persecution very often have no safe and regular alternatives to reach Europe. Only by making these solutions available urgently, people will not be forced to resort to traffickers and to risk their lives. By bringing voices and effective solutions from the border territories where migration is lived directly, we call for a fairer world.
Be part of solidarity movement! Join us, sign the petition and let’s change together bringing stories and voices from the borders at the core of EU.”

As the promoters have indicated, the petition is addressed to the newly elected EU Institutions (Parliament, European Commission and Council).
“The 3rd of October will be a day to commemorate and reflect on these human losses; a day where wrong policies confront our individual and European values which should always stand higher. A day to remember the past, to correct the present and to envision our European future of solidarity and respect of all human lives.”, ask the promoters and should ask all those who do not remain indifferent.