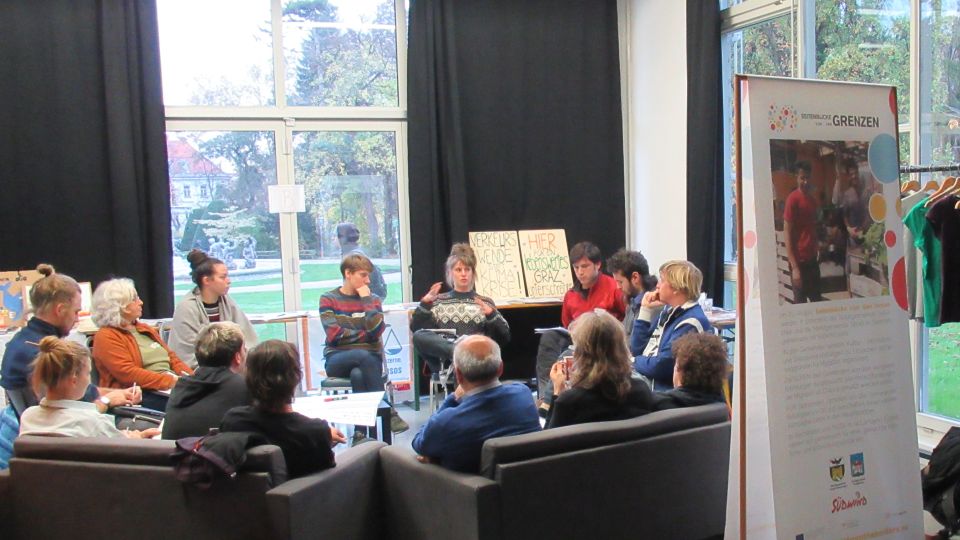 In cooperation with the documentary film festival Crossroads and Seebrücke Graz, a film screening, two panel discussions and a conference on more humanity with a focus on flight and migration took place in the Forum Stadtpark in Graz from 1st to 3rd November as part of the EU project “Snapshots from the borders”.

My flight and my arrival – A teenager’s journey through
the Sahara desert,as well as through Libya and across the
sea to Europe

Filimon Mebrhatom, a young refugee activist from Eritrea, spoke in a panel discussion about his escape experiences in the desert, in Libya and on the Mediterranean Sea. Filimon is currently working on a book to inform people in Europe about the numerous unrecorded deaths in the desert, about the violence and murders in Libya as well as the respect the sea rescuers deserve.

Solidarity instead of Fortress Europe
Fighting against causes of flight, not the people on the run

Florian Stadler, sea rescuer and head of mission of the first rescue mission of the ship Iuventa, was among the podium guests during another discussion.
He talked about how the young crew was able to save thousands of people in distress at sea and how the Italian judiciary is now investigating 10 crew members for aiding illegal immigration.

The film shows a group of young committed people who bought and converted an old fishing boat with the help of a crowdfunding campaign. The following year, they departed for their first sea rescue in the Mediterranean with their ship, the “Iuventa”.
After almost two years of service and about 14,000 people rescued from Mediterranean, the ship was suddenly confiscated in August 2017 and detained by the Italian authorities in Lampedusa. Since then the accusation of cooperation with the people sending the smuggling boats from Africa, has been circulating. The emotional story was captured by director Michele
Cinque.

On the 2nd and 3rd of November active people who do not want to accept Fortress Europe and its hostility towards people gathered in the Forum Stadpark. Among them were committed citizens, scientists, NGO employees and people with flight experience. Numerous reports of violent pushbacks and the countless deaths in the Mediterranean showed a shameful picture of Europe. The goal is to intensify and strengthen the efforts for a more humane
migration policy as well as the observance of human rights through international networking.