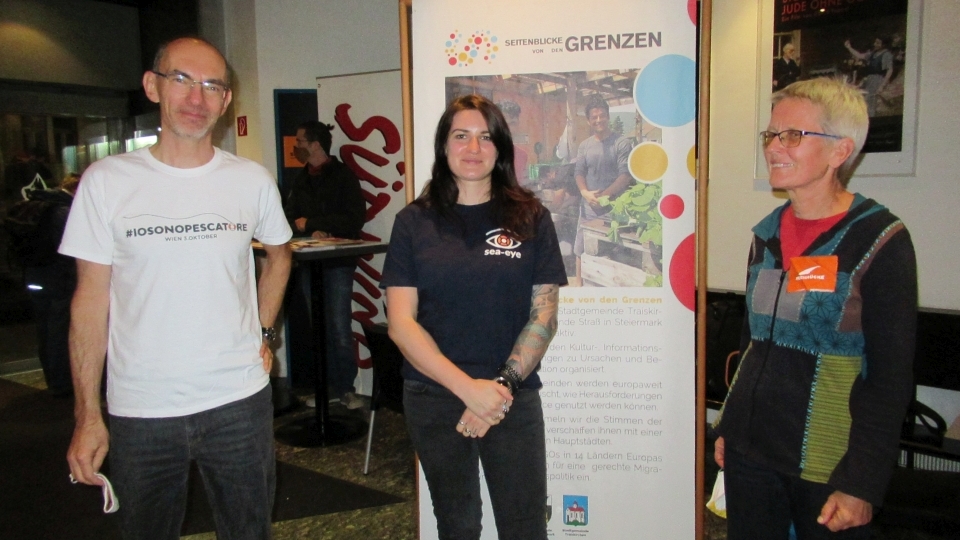 On the 29th of September Südwind Steiermark screened the documentary Eldorado. For the discussion sea rescuer Sophie Weidenhiller was invited as a guest.

On the 29th of September Südwind Steiermark and Seebrücke Graz screened the documentary Eldorado by Markus Imhoof. Sea rescuer Sophie Weidenhiller was present for talking about the film. She reported on her rescue mission Sea – Eye and on the difficulties she had with local autorities because she did something self-evident: saving lifes. More than 60 viewers took part in the discussion with Sophie about the possibilities of helping people in need and what impact migration politics of the EU could have on the issue.

In this documentary Markus Imhoof tells a very personal story, to make a global phenomenon more reachable. His questions about humanity and civil responsibility in our world today take him back to experiences of his early childhood and his first love.

One of these memories followed Markus Imhoof throughout his life. It was winter in neutral switzerland during the second world war, when Markus’ mother chose a refugee child at the freight terminal to take home and take care of. It was the memory of the girl named Giovanna that changed little Markus’ view of the world.

70 years later once more foreign people come to europe. Markus Imhoof never let go of the memory of Giovanna and he followed her tracks back into her home country, where Markus stayed to live for some time. Now he boards an Italian Navy ship to join them for the operation „Mare Norstrum“, during which more than 100.000 people were rescued from distress at sea. Through the eyes of the child that he used to be he is searching for answers that have haunted him since then.

The screening was organised with the support of the EU funded project Snapshots from the border. The co-operation partners that evening were: Südwind, die Gemeinde Straß in Steiermark, Seebrücke Graz, System Change not Climate Change and the evangelischen Heilandskirche Graz.