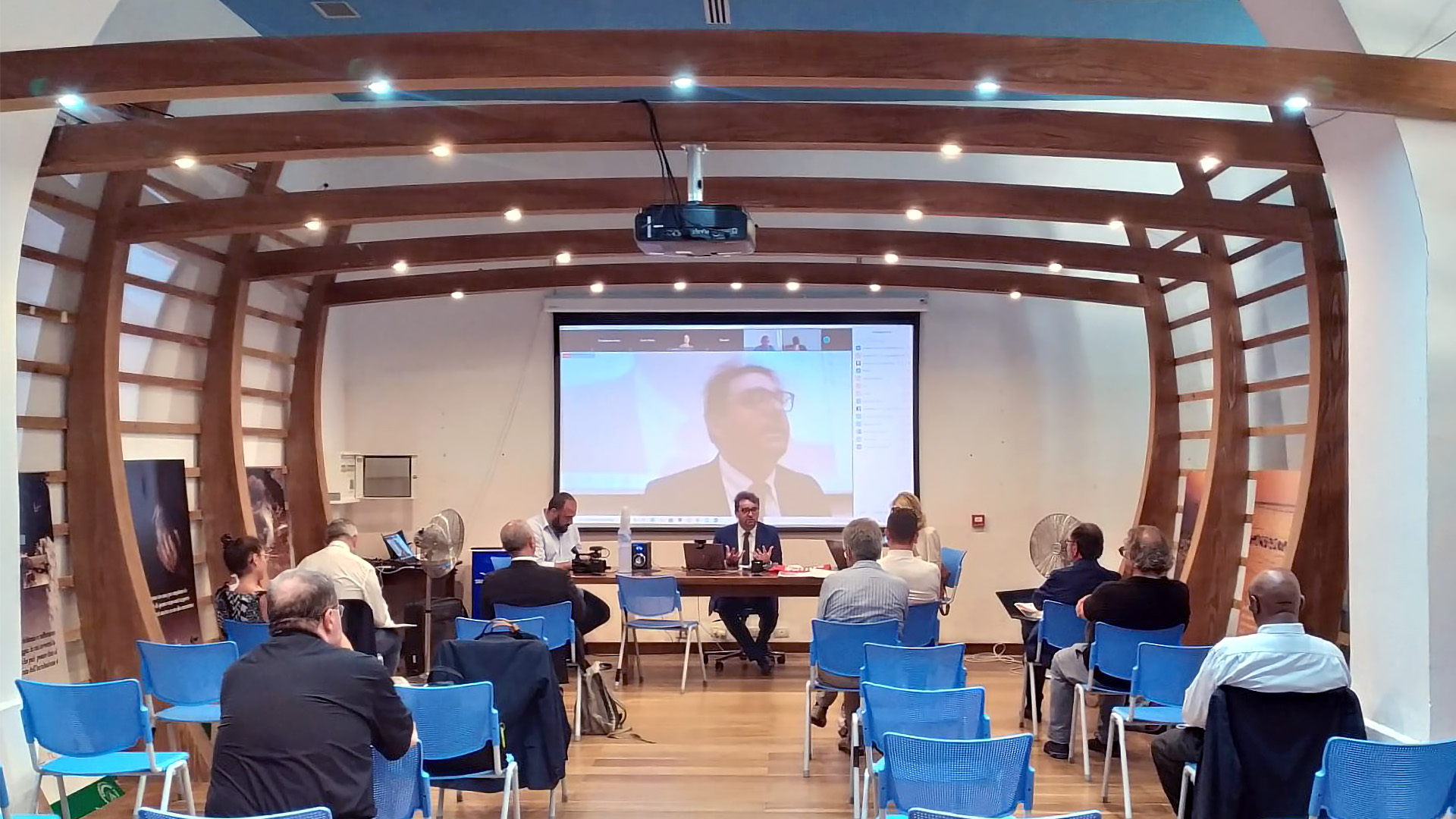 Lampedusa, place of peace in the Mediterranean Sea
«The commitment of Lampedusa to the humanitarian reception of migrants, to respect for human rights and to promote a path of Peace starting from the heart of the Mediterranean is known internationally. This island is also known as the “Gateway to Europe”, which is also the “name” of the artistic installation by the sculptor Mimmo Paladino located in the southernmost tip of Lampedusa, and therefore of the Old Continent. But that “Door” also wants and must be a “Window” on Africa. As Mayor of Lampedusa and Linosa, a Municipality that holds the role of lead body of the European Union project “Snapshots from the Borders”, and is a member of UCLG (Union of Cities and Local Governments), I firmly believe in a path that can lead to our Island to be also a place in which to concretely promote opportunities for meeting and comparison».
(Salvatore Martello, Mayor of Lampedusa)

The conference on July 9, 2021, in Lampedusa
On July 9th 2021 in Lampedusa an important event will be held in “hybrid” mode, starting from an initiative of the University of Teramo, where in 2019 the second “Gran Sasso Forum” was held during which the “Charter of Teramo”, a document that was then signed by about 30 Rectors of various African Universities and which intends to promote initiatives and actions of equal cooperation with Africa. The following year the second edition was organized, and now work is being done on the organization of the third conference of African Rectors scheduled for the next Gran Sasso Forum, which will be held again in Teramo (30 September-2 October 2021).
The Municipality of Lampedusa and Linosa proposed to carry out a preparatory session for the conference precisely in Lampedusa, also with the intention of supporting any initiative useful for enhancing the best training experiences that come from African countries, lands of origin of migratory flows but at the time the same places where personal and collective experiences are born and grow that deserve to be known and valued, with a view to solidarity and international cooperation. It is our intention in this event to involve European and national institutions together with the University of Teramo.
Due to the Covid-19 emergency, the event (promoted with the support of the “Snapshots from the Borders” project) will take place in hybrid mode, with some speakers present on the island and all the others connected online.

Building a new page of history
Your participation would be important (through an online connection) so that you can offer your point of view, you can get to know more closely the value of this initiative which intends to help strengthen and expand relations with African countries in which many young people, thanks to their universities, are committed to building a better life and society.
Because the future of Africa is closely linked to Europe, just as the future of Europe cannot ignore what happens in Africa. We think that this time, full of insecurities and crossed by the COVID-19 emergency, is the right one, because apparently unlikely, to generate new certainties and write a new and beautiful page of history. Peace and cooperation can be the theme around which the network of universities, the island of Lampedusa and the international system can engage, offering horizons and justice to the dignity, talent and courage of every woman and every man from wherever he/she comes from.