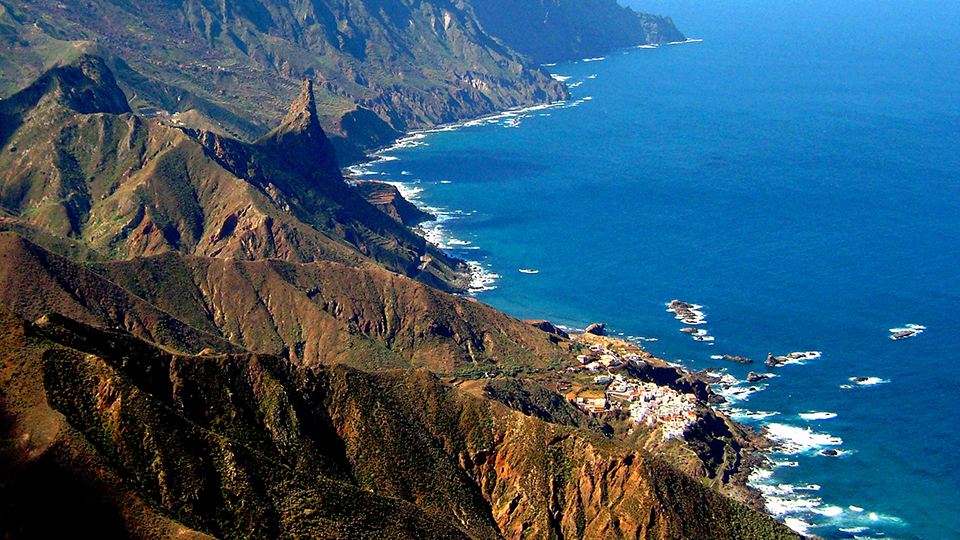 “Tenerife has always been a transit zone, a bridge between three continents: Europe, for historical and political reasons; Africa, for geographical reasons and America due to the to-and-from migratory movements of the last few centuries. The local identity and the identity of each Canary Islands family is marked by these migrations to a greater or lesser degree. Almost everybody in Tenerife and the Canary Islands in general has a picture in their family album of some more or less distant relative who emigrated to Cuba or Venezuela, for example. Likewise, Tenerife has always opened its arms to people who come by sea or air, both those returning from Venezuela or Cuba to what was the land of their ancestors and to people who, more recently, have arrived from Africa, Latin America or European countries, attracted by the opportunity of getting jobs in the tourism industry or because they want to find a better life: often, unfortunately, losing their lives at sea in the process”.

Iñaki has a clear idea. Like everyone who looks around, backwards and forwards. That they look through. And that, in the end, they find themselves in the other. “My relationship with the immigration issue began when I started working with the Juntos en la Misma Dirección initiative in 2011. I am a journalist, and I carried out tasks related to communication in this project. However, I also worked as a facilitator with a Communication Group in which people from different backgrounds and cultures collaborated to try to disseminate a more positive image of immigrants in the media. I’ve been working on this project for more than eight years as well as collaborating on initiatives like the Anti-rumour Strategy or, currently, the Snapshots from the Borders project and this time has helped me to realise that people want to contribute and feel integrated into the community in which they are living. Regardless of their origin, culture or religion, everybody seeks a relationship with their surroundings and to help make it better. The community spirit is innate in human beings and diversity, of all kinds, benefits and enriches all communities because it provides a greater variety of ways of thinking, acting and solving problems. The two main things I have learned is that all people are diverse in one way or another and that all people need to feel recognised and valued in their community. A lot can be built on these pillars”.

Juntos en la Misma Dirección and Anti-rumour Strategy, how would you describe these two projects?
“Juntos en la Misma Dirección (“Together in the Same Direction”) emerged in 2009 as a project to contact the immigrant associations on the island of Tenerife, to learn about their needs and concerns and create a working network to strengthen relationships and start to construct joint actions to work towards coexistence. Ten years later, this initiative has grown to become the main cultural diversity management strategy on the Island and has the support and backing of the Tenerife Council and the University of La Laguna. Juntos en la Misma Dirección is especially outstanding because it always seeks social involvement, that actions and objectives be constructed horizontally and that both immigrants and locals get involved in the joint creation of activities, work plans and lines of action. Juntos en la Misma Dirección currently has several theme-based, open, participative working groups that address issues such as education for development, social participation, gender violence, inter-religious dialogue, youth or juvenile participation and development of a participatory process in neighbourhoods with a high proportion of immigrant population. These groups help to channel Juntos en la Misma Dirección’s actions through goals and activities designed and organised in a participative manner. Moreover, the initiative has developed general activities that bring together all the people, groups and participating bodies to consider options or build initiatives together various times a year”, explains Iñaki. “The Anti-rumour Strategy has been working on the island of Tenerife since 2013, after emerging as an innovative experience in Barcelona. In that year, a participatory working group was launched in Tenerife that people were invited to join and work together on activities that enable identification of the main rumours circulating in society about cultural diversity and immigrants and, once identified, to generate arguments to counteract and combat them while inviting people to reflect and show empathy. Over the years we have carried out numerous activities, meetings and campaigns to combat these rumours and disseminate positive messages in society about immigrants and diversity that enable people to develop other kinds of visions and points of view on certain issues that are spread in the form of rumours, stereotypes or false beliefs and that make coexistence more difficult”.

A lot has changed over the years. For Iñaki, who is considered to be doing a job, he found himself involved as a person and as a citizen in everything that happened around him, and in Tenerife. How has this community and its approach to migration changed in recent years?
“In terms of immigration, 2006 was the year in which the highest number of small boats packed with immigrants arrived on the coast of the Canary Islands and Tenerife, and also the year with the greatest number of deaths at sea of people who tried to make it to the Islands to settle, or as a fist step on a voyage that would take them to other parts of Europe. The flow of immigrants arriving by sea has been declining since then but has not entirely disappeared. The economic recession hit Spain hard from 2008 onwards and caused a lot of immigrants to return to their home countries or try to settle in other parts of Europe. The number of people coming to Tenerife looking for jobs in the tourism industry has remained steady in recent years, although the countries of origin have changed: countries like Russia or Italy are now the most common points of origin”.

Polemics and politics, propaganda and problems, however, always collide with real life. And in that we need to find solutions. Could the models that work in Tenerife work elsewhere in Europe?
“Juntos en la Misma Dirección could be a model to follow in other territories with high concentrations of immigrants and has, in fact, been highlighted on several occasions as an example of good practice at both the domestic and European levels. In my opinion, the main component of Juntos en la Misma Dirección to be taken into account and that makes it suitable for imitation is the working method, based on building from the bottom up, horizontally, with the participation of all the people involved, caring about people and relationships, fostering inter-cultural, inter-religious and inter-generational dialogue and highlighting all the positive aspects that diversity brings to our society, without forgetting aspects such as creativity, social innovation and fun in the activities and working sessions”.

For a long time, for Pino and many others, this is no longer just a job. The stories that remain imprinted on you are many, they are never the same as they seem when you don’t live them first hand. And Pino also has his wealth of memories.
“In my opinion, one of the outstanding success stories about coexistence on the island of Tenerife has taken place in recent years in the town of El Fraile in the Arona municipal district in the south of Tenerife. Problems of coexistence had arisen between people of different religious beliefs, so the Citizen Participation Group that had been set up in the district set out to foster dialogue between religious communities. This work began to show results, which led to the creation of an of Inter-faith Dialogue Group, which now conducts workshops and activities that focus on the specific problem. It also organises an Inter-faith Prayer for Peace, Respect and Coexistence event on an annual basis, of which this year marks the sixth edition, in which religious leaders and religious communities of a dozen confessions and beliefs draw up a joint manifesto for peace, respect and coexistence and show, in an event open to the public, that despite having different religions or cultures, there are more things that unite than separate us. This work not only provides an example to the world, but has also acted to improve coexistence between people from different communities in this district”.

It’s time to go again. What is the postcard that can be sent from Tenerife to the world?
“I’m not from Tenerife. I was born in the Basque Country and came to Tenerife when I finished my studies in 1999. Something I can say is that Tenerife society is a very open, friendly and welcoming one, always ready to share, interact and have a good time. Historically, this has been a place where people have gone through hard times and this is evident in the capacity for work, effort and sacrifice of Canary Islands families. The people of Tenerife feel very proud of their land and their people and can boast of having an island of great beauty, with many enchanting nooks and crannies, a lot of which are hidden from tourists’ eyes because one needs to know the island intimately to enjoy some of its treasures. Although it is known abroad for its sun and beaches, I prefer without doubt the wonderful Anaga mountains as a magical place where you can lose yourself and enjoy long walks through ancient forests”.