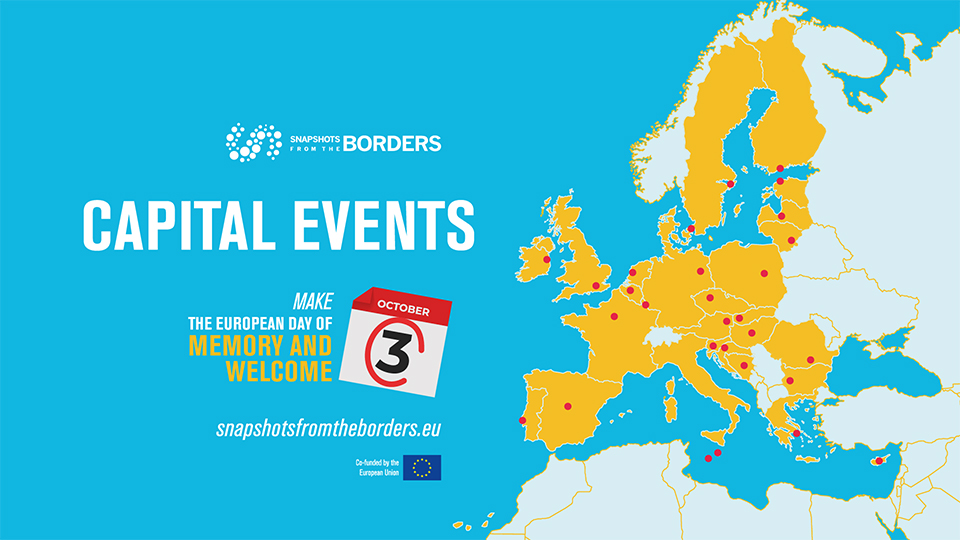 The numbers, sometimes, are able to tell more than many words: 19 local border authorities, 37 associations and civil society organisations from all 28 European countries, a series of events in 29 other European capitals and cities. Cultural events, documentaries, debates, exhibitions, exhibitions, flash-mobs, concerts.

All this, and much more, will be next October 3. The campaign for the establishment of October 3 as a day of remembrance and remembrance, chooses the anniversary of one of the most terrible shipwrecks in the history of the Mediterranean, when in 2013 – off the coast of Lampedusa – 368 people lost their lives.

The campaign was born from the desire to make October 3 an anniversary that marks the beginning of a new period, to remember and welcome, to manage migration flows in the legality and rules, without ever leaving these slaughters unpunished.

In Lampedusa, the heart of the campaign No More Brick’s in The Wall – Snapshots From The Borders and of the petition to the European institutions (Parliament, European Commission and Council of Europe), to give October 3 a new and different meaning, will be the scene of a series of public events that will involve the local community and guests from all over Europe, while elsewhere there will be many events at the same time.

A process that has been generated around the responsibility that border municipalities have to live every day, far from the policy of debates, which requires to manage people and their dignity. The watchwords of the initiative are clear and straightforward:

“From October 3, 2013 to today, 17,900 migrants and refugees have died or are missing in the Mediterranean Sea. While 2016 was the most lethal year, with 5,096 people who lost their lives in a desperate attempt to find salvation in Europe. In 2018 one out of every 18 people who crossed the Mediterranean heading to Europe lost his/her live: an unacceptable human cost and an unacceptable human statistic. The 3rd of October will be a day to commemorate and reflect on these human losses; a day where wrong policies confront our individual and European values which should always stand higher. A day to remember the past, to correct the present and to envision our European future of solidarity and respect of all human lives.”

A reflection that concerns everyone, a budget that imposes solutions, legal and managed, organised and safe, but that does not remain indifferent to all this. On 3 October, in Lampedusa and in many other places in Europe, there will be many voices relaunching this date as a symbol of remembrance, but also of a new beginning.