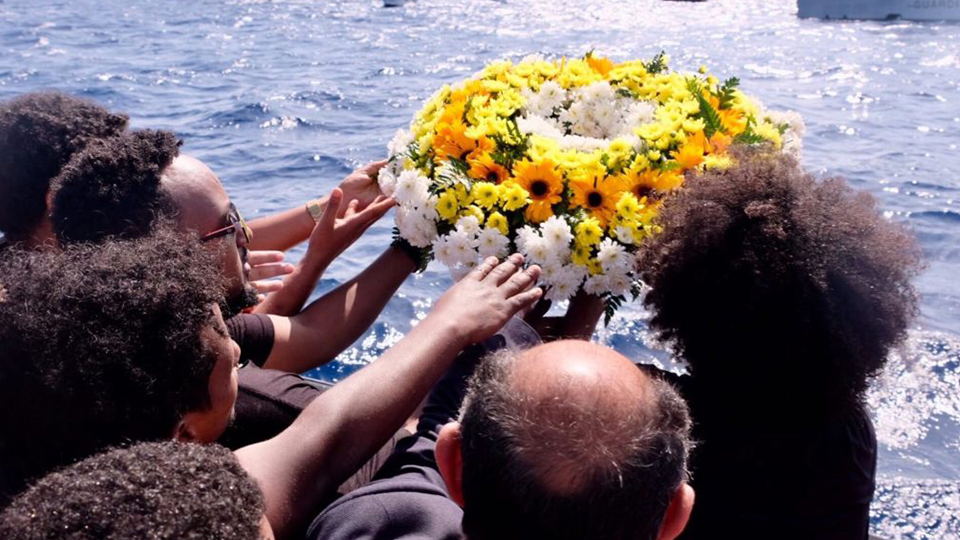 3 October as a European Day of Memory and Welcome, for a new beginning

The embrace between Vito, Costantino and the guys they saved on the night of October 3, 2013 is like a new beginning. Close to each other, around that memorial that is inaugurated at night, at the same time as the shipwreck of the time, is the symbol of a rebirth.

“To build a better future – says Totò Martello, mayor of Lampedusa and Linosa – we must preserve the memory. Only by remembering what happened can we strive to prevent it from happening again”.

The sixth anniversary of that tremendous massacre, when a boat with over 500 people on board sank in front of the coast of Lampedusa, marked a new beginning. To remember the 366 victims, to share with the 155 survivors, a memory that becomes change.

The Municipality of Lampedusa and Linosa is the leading body of the community project Snapshots from the Borders, which organizes and promotes a series of initiatives in Lampedusa and in all the capitals of Europe to remember this dramatic event, to honor the memory of the victims and to promote the petition to ask the EU that October 3 becomes “European Day of Memory and Welcome”.

For the first time, 3 October was a European day. The commemorations, in fact, were not held only in Lampedusa: Amsterdam, Athens, Berlin, Bratislava, Brussels, Bucharest, Budapest, Copenhagen, Dublin, Helsinki, Valletta, Lisbon, London, Ljubljana, Luxembourg, Madrid, Paris, Prague, Riga, Sofia, Stockholm, Tallinn, Warsaw, Vienna, Vilnius, Zagreb. Agios Athanasios, Cyprus, Mostar and Palermo have been added to these capitals. Lampedusa is the starting point for the memory and the desire to make memory a project for the future without deaths at sea.

There have been many initiatives around the Snapshots project. Vito Fiorino, who runs an ice cream parlour on the island, does not hold back the emotion. After a life as an entrepreneur in Milan, his love for Lampedusa made it his new home. That night, with his friends, he went out to sea to relax.

“We heard screams, but at first I thought they were seagulls. They were people.” Vito and others launch themselves to save all the people they can. ”They were naked, then they told us that they threw their clothes so as not to drown; they were covered with gasoline, because of the explosion. They were slipping away from their hands. I could no longer look at the sea with the same eyes after that night. Vito manages to save 47 people. ”Many of the bodies are scattered in various cemeteries in the province of Agrigento, some of them nameless. Since then, I have fought for justice for the victims and for the survivors to have a place to remember. And so, on 3 October last, with the help of the Snapshots project and Gariwo – Consortium for the Forest of the Righteous, in Piazza Piave in Lampedusa, the inauguration of the Memorial “New Hope” took place, named after Vito’s boat, with the wreckage of the shipwreck and an iron work with all the names of the victims.

A work elaborated by the architect Gaia Rossi. “We wanted an artistic and human act. Next to the monument, which was inspired by a vortex, but which aims to rise, to rebirth, there is the mural of the artist Snow, which recalls a wreath of flowers, the one that is placed in the sea every year.

There have been many initiatives that have animated this October 3, which aims to become the beginning of a process that by remembering changes things. The initiatives of the Comitato 3 Ottobre, which has been animating the island for years, brought to the island guests and experts, over 500 students from different Italian and European cities together with the survivors and families of the victims of the sinking of the Mediterranean. Debates, workshops, educational events, guided tours for students, musical events. In collaboration with Snapshots, an exhibition was also set up at the Museo della Memoria of Lampedusa, with the return of the laboratories of Dimmi – Diari Multimediali Migranti, curated by the educator Valerio Giacone and the psychologist Evelyn Puerini.

The march towards the Porta d’Europa the ceremony of recollection with the survivors of the shipwreck, students, the local community, representatives of institutions and associations, a procession of fishing boats laid a wreath of flowers in the sea in the mirror of water where the shipwreck occurred.

Just remembering, however, is not enough. Making 3 October the European Day of Memory and Welcome is a path that aims to share responsibility for a global phenomenon that must be governed effectively, without propaganda.

Mayor Martello, from the island of Lampedusa, is convinced that it is time for the border communities to unite to work together, in a shared and European project. Looking ahead, remembering what has been, but working towards change.
“I deal with the citizens of Lampedusa and Linosa, their daily problems, the fact that we want to be Italian citizens to all intents and purposes. Always. The enormous problems that exist cannot be solved with propaganda, like the fake ‘closed ports’. Lampedusa has never been closed, it never will be, and it will always remain welcoming to everyone, but it is time to change and govern this phenomenon in a legal and safe way for everyone”.

Changing also the approach. And so, next to the memorial of the shipwreck of October 3, 2013, as part of the project Snapshots, was also presented the artistic initiative of the sculptor Guglielmo Vecchietti Masacci, who in a path participated with the community will create on the island the artistic work “Wings of Freedom”.

“I imagine a work that is crossed by light, two wings, that from the earth allow you to see the sea and vice versa,” says Vecchietti Masacci. “A work that can be seen from the sea and from the land, that inspires dreams of those who arrive and those who live on the island. A double look, not a museum, not a monument. A work that has a meaning of ambition towards freedom and respect for differences, which in the end make us all equal.”

The days before the commemorations, thanks to the support of Snapshots, were animated by the Lampedusa Festival. As explained by the artistic director, Luca Vullo, “we want to listen to the soul of the citizens of Lampedusa, bringing art and culture, for them and for everyone, without excluding anyone and without making the citizens of the island feel told only for the migrations. This cultural operation is an operation of humanity and sharing, so that Lampedusa tells the story of life, no longer death”.

A message to Europe was sent out from Lampedusa on 3 October. Remembering serves to never again repeat the same mistakes, to never leave the border communities alone, to use art as the language of welcome, of memory and of the future.