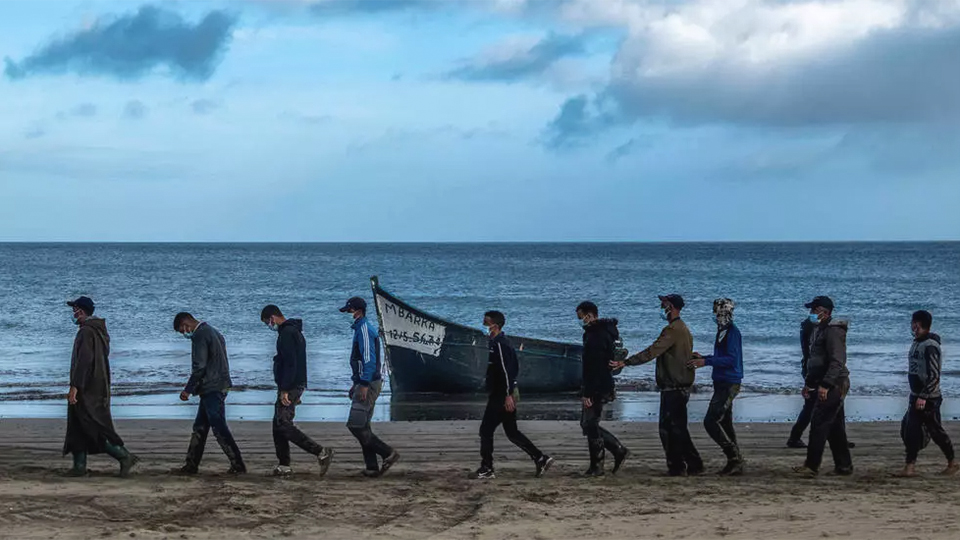 Arrivals increased by 600 % in the last year

More than 14,000 people have arrived in the Canary Islands since the beginning of the year. These Spanish islands had not experienced such a migration crisis for more than a decade. In October 2020 alone, almost 5,000 arrivals were registered. Added to this is the health crisis, which the Spanish authorities are finding very difficult to manage. The situation on the ground is chaotic, with a lot of unrest, difficulties in respecting migrants’ rights and management problems.

The body of a lifeless man was among the nearly 2,200 refugees and migrants who landed in the Canary Islands over the weekend of 8 November, a new record number of arrivals.

More than 1,500 people are sleeping in tents on the Arguineguin dock in Mogán, a town in Gran Canaria.
About 5,000 more are being housed in empty hotels as the islands’ tourist season has ground to a halt because of the COVID-19 pandemic.
Aid agencies claim without rapid action from the Spanish government, the situation could mirror the fraught refugee crisis in Greece.

The only precedent for such a crisis was in 2006, when 30,000 migrants made the dangerous Atlantic crossing from West Africa to the islands.

Maria Greco, from the Entre Mares (Between the Seas) refugee rights group, says that Spain has learned nothing from that crisis, now exacerbated by the Covid-19 epidemic, which risks sowing discontent even among the island’s inhabitants.
“Hundreds of people sleep in the harbour of Arguineguin in Mogán. Thousands more live in tourist hotels. Yet, in November 2018, the Frontex agency held a conference in the Canary Islands and warned that the traffickers had changed course, but nothing was done,” Greco told al-Jazeera.
“These people are being denied rights to see lawyers and the press have complained that the Red Cross are not letting journalists talk to them,” she claimed.

In 2020 there was a 664 per cent increase in the number of refugees and migrants who landed in the Canary Islands compared to the same period in 2019. Smugglers changed course, moving along the most dangerous route between West Africa and the Spanish archipelago, instead of crossing the Mediterranean to reach southern Spain.

The number of people who crossed the Mediterranean to Spain this year decreased by 27.8% compared to the same period in 2019, with 14,252 people arriving in Europe compared to 19,733 last year.

Traffickers lowered prices from around $2,377 to around $951, according to media reports.

Greco said the boats depart not only from Morocco and Mauritania, the two countries closest to the archipelago, but also from Senegal and Gambia, more than 1,000 kilometres (600 miles) further south.

The countries of origin of migrants are mainly from the Sahel region of Africa, West Africa, but some from South Sudan and the Comoros Islands in the Indian Ocean.

“This weekend at least 2,188 people arrived on the islands in 58 small boats and kayaks. This is a new record we have never seen before,” said Txema Santana, of the Spanish Refugee Aid Commission (CEAR), in Al Jazeera.

Morocco began to move refugees and migrants from its northern coast to the south and west, starting the wave towards the Canary Islands.

“Spanish authorities should immediately alleviate overcrowded and unsanitary conditions on the Arguineguín pier, in Gran Canaria”, Human Rights Watch said. “Improvising a reception and identification camp on a pier was never a good idea and now the chaos there poses a real threat to people’s rights, health, and safety. Times are tough, but Spain can and should provide a humane response to people arriving on its shores.”