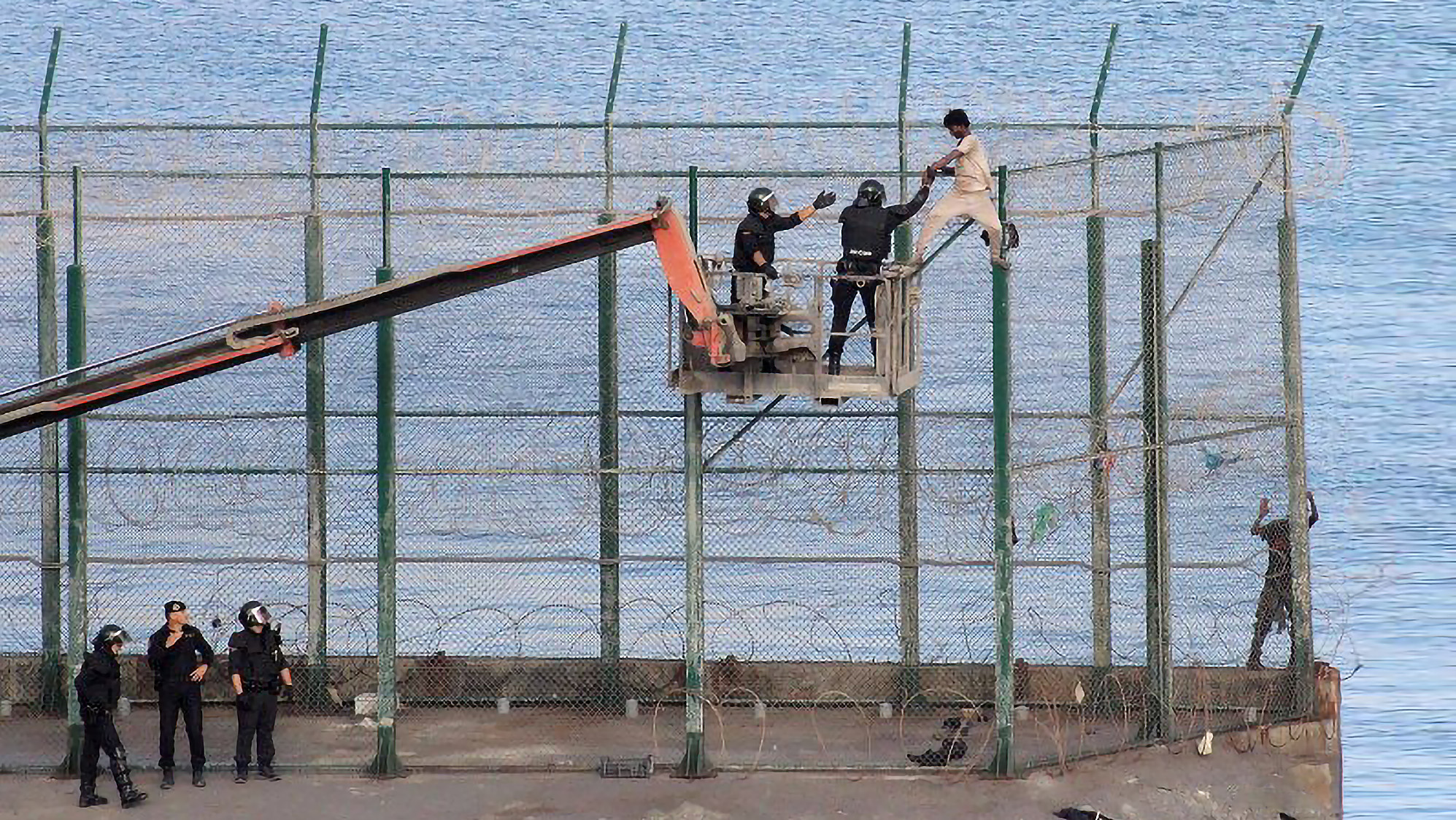 After a long time, the Spanish enclaves of Ceuta and Melilla are back in the limelight

As is often the case in the media, it is once again an image that captures the meaning of a story. The Spanish Red Cross worker who rescues and consoles a desperate boy who has just swum in has shaken consciences, just because it has been told.

It brings to mind little Aylan Kurdi, drowned on a Turkish beach, which in 2015 – for a brief season – led to the idea of humanitarian corridors being opened, which were immediately closed, returning the Balkan Route to its condition of an obstacle course.

Armoured vehicles and soldiers sent from Madrid arrived on the beach of Tarajal, the Spanish government announced that it had turned back 2,700 people to Morocco, while appropriate measures will be taken for 1,500 unaccompanied minors.

As had already happened in February 2020 on the Greek-Turkish border, and with the Canary Islands between autumn and early 2021, it is once again a diplomatic crisis that triggers a humanitarian crisis.

According to Spanish press reports and statements by Moroccan diplomats, the reason for the suspension of checks by Moroccan police on migrants is due to Madrid’s decision to accommodate a political leader disliked by Rabat, who was hosted by Covid-19 for treatment. The Spanish government has denied that the two facts are linked, but it remains an issue that is now ingrained in EU migration policy.

As it happened a year ago with Turkey, Morocco has used the lives of these people politically. Morocco receives more than 30 million euros in funding to control the flows. The aid is intended to finance the costs of patrolling and monitoring the sea and land borders. Morocco often stresses that it does not have sufficient means to counter irregular migration flows and often asks for economic support. Rabat estimates the annual cost of combating illegal immigration at €434 million.

The problem, apart from investments, remains unresolved and the Pact on Immigration and Asylum does not mark a change of step: the externalisation of borders, for a fee, does not have a positive impact and makes the EU politically blackmailable depending on the internal and external conditions (just think of Libya) of the third country involved.

How many more dramatic crises will we have to watch on television to see the European institutions react? How many more victims or how many more illegal rejections – because it is obvious that there has not been time to identify all the people Spain rejected in a few hours – will there be before we change course?

To date, the Global Compact is still the only instrument that has brought practical solutions to the debate on migration, creating alternatives to illegal immigration, providing humanitarian corridors, focusing also and above all on the contexts of departure to work on solving the causes that lead people to leave.

Situations such as those we have seen in recent days in Ceuta and Melilla, where thousands of people become the instrument of political conflict, end up fuelling the image of an ‘invasion’ that does not exist in reality, but which the media convey, also despite themselves.

It is time to act, it is time to invest in a change of course and not in a security logic that does not work and that makes the EU blackmailable and endangers the lives of thousands of people.

In Ceuta and Melilla, there are normally very few crossings. And often lethal, because the barriers were raised every year, while on top of the nets there was barbed wire that seriously injured those who tried to climb over. Today Spain has plans to replace the nets and barbed wire with a huge wall, which would be the largest in Europe. The project will cost over 17 million euros. Are we sure this is the solution?