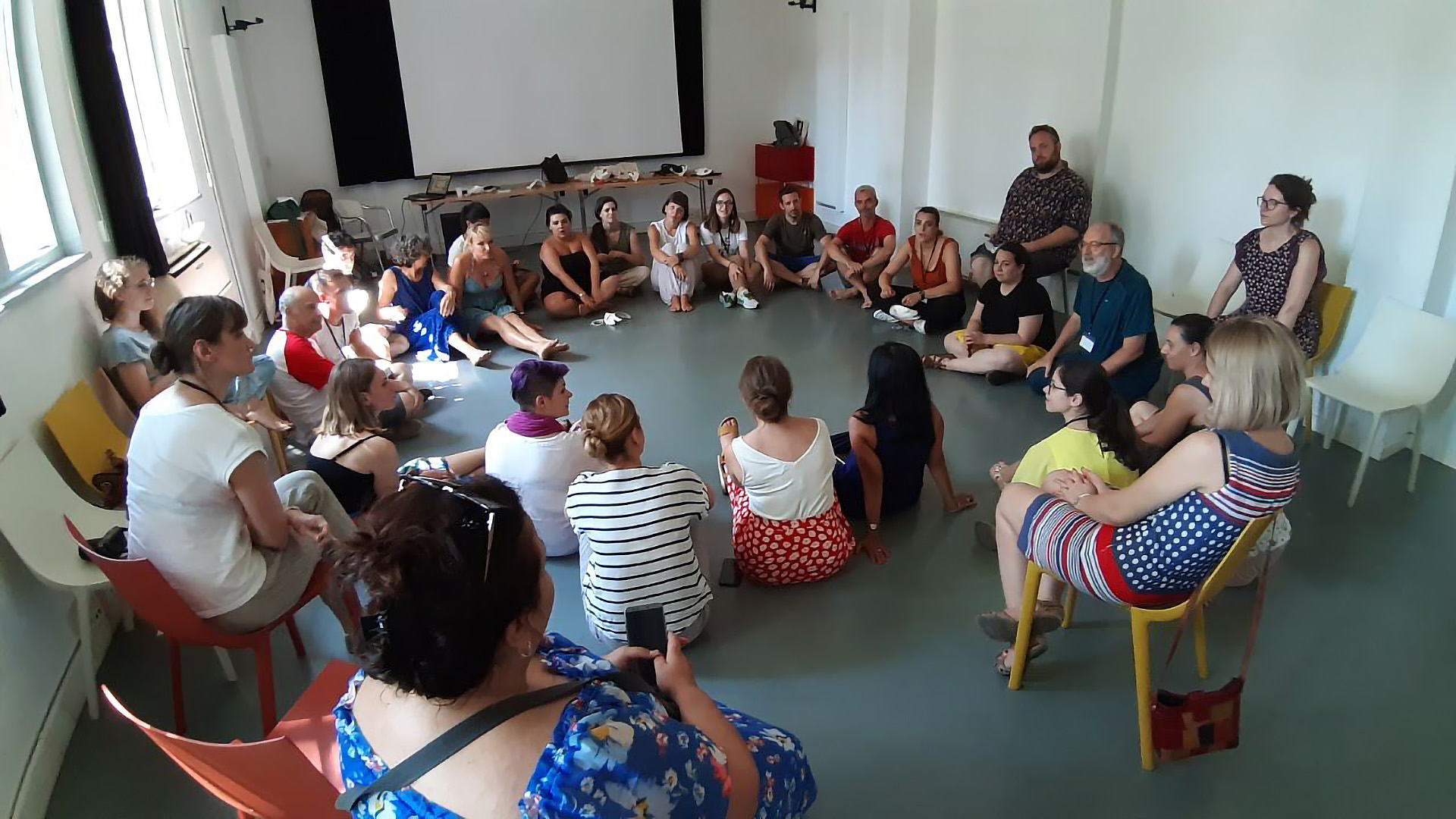 “The performance Game was produced as part of the IMPACT project in collaboration with the youth theatre in Mostar. Game was inspired by the series of workshops held in Mostar with refugees and guests of the Salakovac refugee camp near Mostar. During the workshops, the staff of the Local Democracy Agency Mostar (LDA) and the young artists, the actors of the youth theatre of Mostar, work with the families of refugees using the methods of theatre pedagogy. During this process we managed to be very close to these families and we are still in contact with some of them. The whole process has been very intimate and full of difficulties and hard personal stories of people who have spent their whole lives in the war and lost most of their families. People who just want to live a peaceful life and secure a future for their children. These personal stories were a great inspiration for all of us and especially for the young actors and the director of the show Game, who managed to share these stories with the audience in a unique way. We organised a Facebook Live and together with the families, camp users from Salakovac and participants of our workshops, thanks to the online show, we were also followed by some who had passed through the camp and are now in the UK. This was the most touching moment of the whole process. And this is something that makes this project much more than just a project”.

This is how Dzenana Dedić, director of ADL Mostar, describes a unique experience of its kind: working with refugees in Bosnia-Herzegovina through the medium of theatre, a mean of healing unseen traumas and wounds through storytelling (inner and outer), in a country that has known the horror of war and is now home to tens of thousands of people fleeing war. But what is LDA?

“LDA Mostar actively participates in democracy building at the local level, through more than 200 different projects and activities implemented not only at the local but also at the regional level, since 2014 – says Director Dedić – with respect to migration, we started to deal with it long before the routes passed through Bosnia – Herzegovina. The situation in the city of Mostar, which is a divisive city, was particularly interesting, and the divisions arose as a result of migration during the war in the 1990s, but also with post-war migration. As part of the Urgent project we are the local partner of the Snapshots project, the only non-EU partner, and we were involved here at a time when there were no migrants yet in Bosnia and Herzegovina and our role was to share our experience and disseminate the results of the project”.

This is all the more important in light of what has happened in recent years. “As the situation of migrants in Bosnia and Herzegovina has changed, so has our role in the project. We implanted some activities that were not originally planned, such as the national event, screening of documentaries, signing petitions,” says Dzenana. “Even during the project implementation period, we contributed with the Game theatre performance in response to the impossibility of implementing activities due to the pandemic restrictions.  In addition, together with the project partner ISCOMET from Slovenia and the Faculty of Political Science in Sarajevo, we organised an online conference to discuss the current state of the situation of migrants in our country. In this context, the Impact project used the performing arts as a tool for social inclusion and an opportunity for cohesion and tolerance’.

On a personal level, when did your civic engagement begin, before you became director of ADL?
“This work helped me to see all the differences, but also the similarities between my personal situation and theirs as refugees. The differences are mainly administrative, geographical, political and the similarities are personal, emotional and moral. The goal, for me and for LDA, is to improve social cohesion in local communities, promoting the integration of migrants through the development of urban policies that favour intercultural dialogue and the use of common space. By addressing the concrete issues and problems of migrants and local communities through concrete actions we have tried to overcome stereotypes about migrants and refugees, to look at a refugee from a different perspective. My first perspective on this topic was personal, because I was a refugee myself”.

Although many people in Bosnia and Herzegovina have had a very hard time because of the war in the 1990s, solidarity with migrants and refugees seems to have disappeared today. What has happened, how is the situation in the country?
“The situation is very complicated both for migrants and for local communities and the state as a whole,’ says Dedić. ‘Many cross the border with Montenegro and Serbia to get here and go to the border with Croatia, which is also the EU border, but they are prevented from crossing. The return to Bosnia and Herzegovina is often violent, with verbal and physical aggression. There are several camps for migrants mainly in the areas of Sarajevo and Bihac and one camp in Mostar, mainly for families. Single adult males often do not want to be in the camps at all or very rarely. They constantly try to cross the border in an attempt called Game.  Furthermore, the existing camps near the border with Croatia have long been in very harsh conditions and have not provided the minimum living conditions for migrants. The political situation in Bosnia and Herzegovina is also not conducive to solving this problem. The authorities of the Republika Srpska (the entity of the Bosnian Serbs born after the war, ed.) without major prohibitions, allow migrants to enter from Serbia and Montenegro and do not want migrants on their territory and do not allow the construction of camps. All migrants who enter Bosnia and Herzegovina cross the territory and wait for the opportunity to leave again. Bosnia and Herzegovina is trying to deal with this problem and the biggest burden is on the local communities.
The opinion of citizens and their attitude towards migrants is divided. Some identify with migrants because they themselves were refugees in their country during the war, others believe that most migrants belong to political movements in Arab countries or are individuals with a criminal background, so they have a totally negative attitude. There are several humanitarian NGOs that try to give basic humanitarian aid to these people. The ghost of war is very present and there are still many people in Bosnia and Herzegovina who want to support people in need, but the situation is not easy.”